Alexander And The Terrible, Horrible, No Good, Very Bad Day 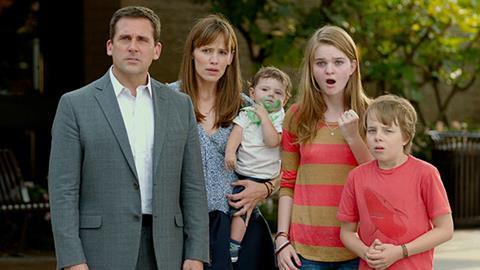 An adaptation of the bestselling children’s book of the same name — the type of tome parents give one of their kids when they’re feeling the warmth of the spotlight shift to often to siblings — Alexander And The Terrible, Horrible, No Good Very Bad Day strikes a mostly nice balance between the heartfelt and farcical. Possessing the benefits of both modulated mayhem and (perhaps most importantly) brevity, director Miguel Arteta’s adaptation indulges mildly anarchic hijinks while also managing to reliably touch upon something real about the feeling of familial solidarity. Opening against a variety of older-skewing fare, the tween-friendly Alexander should have a chance to carve out a nice run amongst family audiences, and additionally yield solid ancillary returns.

If the movie is in sum a bit simplistic, Alexander delivers upon its modest yet worthwhile aim for kids — to remind us that not everything is as dire as it seems on first blush, and that if we have friends and family who care about us on our side, we always have something going our way.

The movie centers around the harried Cooper clan, a California family headed up by parents Ben and Kelly (Steve Carell and Jennifer Garner), who seem to do a mostly good job of balancing all the commitments and needs of their four kids. The day before his 12th birthday, however, Alexander (Ed Oxenbould) has a bummer of a day (hence the title), including embarrassing himself in front of his schoolmate crush, Becky (Sidney Fullmer). His older sister Emily (Kerris Dorsey) is set to star as Peter Pan in the school play, and his older brother Anthony (Dylan Minnette) stands ready to take his driving test, in order to chauffeur his demanding girlfriend Celia (Bella Thorne) to the junior prom. Alexander feels ignored.

That night, Alexander makes a Freaky Friday-type wish that the rest of his family could have as bad a day as he just did, and when he awakes in the morning, his wish seems to have come true. Against the backdrop of a day that includes the aforementioned events for his siblings, as well as the requisite Big Job Interview for the out-of-work Ben and Big Work Function With a Promotion On the Line for Kelly, assorted mishaps ensue, and Alexander emerges as seemingly the only Cooper with any remaining reservoir of good luck.

One of the many colorful charms of Judith Viorst’s illustrated children’s book was that it didn’t sit in clucking judgment of Alexander’s moodiness — that it validated adolescent feeling in a way so many kids’ books have trouble doing. In adapting the source material, screenwriter Rob Lieber steers things a bit more toward manufactured drama and uplift, but he also does a good job of crafting relatable characters and maintaining some of the small, silly moments of shared pressure-release (kicking trash cans) that bind the family together. There are some buffoonish elements, certainly (a restaurant mishap involving fire, as well as a briefly escaped kangaroo), but they’re mostly limited to bits of heightened comic mayhem rather than entire sequences.

The technical credits are solid without being flashy; Terry Stacey’s cinematography and Michael Corenblith’s colorful production design appropriately take a backseat to the narrative, and Arteta’s smart framing and Pamela Martin’s intuitive editing together avoid the goosing, desultory, emotional click-bait that plagues too many movies aimed at younger audiences.

Oxenbould is appealing as Alexander, and the rest of the adolescent casting is quite good too, with Minnette in particular walking the fine line between the teenage sibling who sincerely loves his family but is just beginning to disengage by nature of burgeoning interests.

At the core of the movie, though, is a legitimately wonderful, utterly to-scale performance by Carell, who plays his kids’ primary caregiver. By not going bigger and broader, Carell anchors the film and gives it a something rare — a big screen father whose love and paternal strengths and foibles are all recognisable. He’s put upon, but never wields his stress as a weapon.

If the movie is in sum a bit simplistic, Alexander delivers upon its modest yet worthwhile aim for kids — to remind us that not everything is as dire as it seems on first blush, and that if we have friends and family who care about us on our side, we always have something going our way.

Screenplay: Rob Lieber, based on the book by Judith Viorst