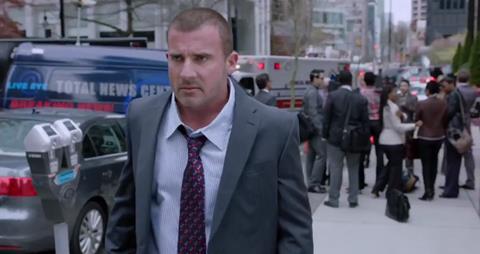 Consistently provocative director Uwe Boll’s contribution to cultural debate on the world’s financial problems comes in the form of simplistic revenge-thriller Assault On Wall Street, which pitches an angry working guy against the fat cats of Wall Street when his life is taken apart due to machinations of the financial institutions.

The scenes of random killinsg are rather uncomfortable, and are at odds with the film’s set-up in trying to make Jim a blue-collar anti-hero.

The slow-burn film – there a whole of angst, discussion and hand-wringing before the bullets start to fly – is impressively cast, especially when it comes to the support performances, but while it hits the right buttons in terms of the headlines its life is most likely in home entertainment rather than the big screen.

The film (which originally had a much more low-key title of Bailout: The Age of Greed) stars Dominic Purcell as Jim, a blue-collar security guard who loses all of his money as his wife Rosie (Erin Karpluk) gets increasingly ill. As his life falls apart, this ex-Military guy decides to arm himself (with sniper rifle, automatics and even some grenades) and take brutal and bloody revenge on those he blames.

The last 20 minutes are a rather garbled series of action scenes as Jim, in mad-sniper mode, starts to slaughter pretty much anyone in a suit before donning a mask and making his way into the office of the corporate big wig on whom he places the ultimate blame. The scenes of random killinsg are rather uncomfortable, and are at odds with the film’s set-up in trying to make Jim a blue-collar anti-hero.

Dominic Purcell has the bulk but not quite the subtly to play the essentially mild-mannered, happily married, man whose life is pushed to the very edge, before he decides to fight back. John Heard and Keith David (especially) chip it with nicely judged cameos, but can do little to salvage this one-tone film. Assault On Wall Street is really only one for Uwe Boll completists.