Danny Boyle and Aaron Sorkin, the director and writer of Steve Jobs, tell Mark Salisbury why it is crucial for film-makers to tell the stories of the tech titans shaping our world 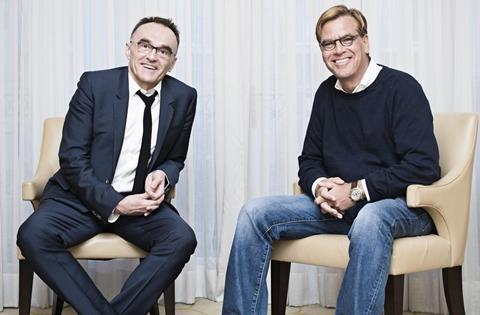 After having successfully answered the question, “How can you make a film about Facebook?” with his Oscar-winning script for 2010’s David Fincher-directed The Social Network, screenwriter Aaron Sorkin turned his typically sharp pen to the late Apple CEO Steve Jobs.

Loosely adapted from Walter Isaacson’s authoritative 2011 biography, Steve Jobs has Danny Boyle at the helm, and stars Michael Fassbender as the eponymous tech visionary, Kate Winslet as his marketing guru Joanna Hoffman, Seth Rogen as Jobs’ friend and co-founder of Apple Steve ‘Woz’ Wozniak, and Michael Stuhlbarg as software developer Andy Hertzfeld. Sorkin spoke to all of them ― bar Jobs, of course ― to prepare.

The result is less a traditional biopic and more a new kind of character study, with Sorkin arguably less concerned with sticking to the letter of the facts than the intent and personality of those under the spotlight.

The film takes place across three timeframes ― 1984, 1988 and 1998 ― at the product launches of the first Macintosh; the NeXT Computer, which Jobs developed after his ousting from the company he had founded; and, finally, the original iMac, which marked his triumphant return to Apple.

As he did with The Social Network, Sorkin applies his focus on Jobs’ relationships with other individuals: the aforementioned Hoffman, Wozniak and Hertzfeld; John Sculley, the former Apple CEO who fired him from his own company (played in the film by Jeff Daniels); and his daughter Lisa (played by Ripley Sobo and Makenzie Moss), whose paternity he publicly denied.

With the script delivering Sorkin’s favoured machine-gun-fire approach to dialogue and the film audaciously directed by Boyle, who shot each act in a different format (16mm, 35mm and digital), Steve Jobs does not flinch from depicting its protagonist as both messiah and monster. “I don’t know whether I am that fond of Steve,” admits Boyle. “If I’m being honest, I’m more of a Woz person.”

What was the project’s appeal?

Aaron Sorkin: It was a coincidence Mark Zuckerberg and Steve Jobs were tech titans. The friction Steve had in his relationships was very interesting to me. I didn’t want to write a biopic, which is what Walter [Isaacson] wrote. When that becomes a movie, it’s a structure that’s very familiar to audiences. I like very claustrophobic spaces and periods of time where there’s a ticking clock. I like anything that’s behind the scenes; that takes place in a theatre. So I thought, “What if I can dramatise these five or so points of friction in the 30 or 40 minutes before a product launch, and leave it to a very gifted director to figure out how that would be a movie?”

Sorkin: I needed to fall in love as opposed to love at first sight. The people I’d done The Social Network with [Sony Pictures] came to me and said, “We’ve bought the Walter Isaacson book and we want you to do it.” Before I even read the book, I said yes. Once I said yes, I started reading and, as important, I began meeting with the real-life counterparts of everyone who’s in the movie and a few dozen others. That’s when I fell in love with the contradictions that are Steve. He was a very charming, very bright guy. He could entertain you for hours and then, on a dime, turn on you and cut you to ribbons. I thought, “That’ll be fun to write.”

Did either of you ever meet him?

Sorkin: [to Boyle] Had you?

Sorkin: Yes, he called me three times. One time to say he liked something I’d done. Then he called again to ask me to come up and tour Pixar; he wanted me to write a Pixar movie. The third time was to help out with his Stanford [University] speech. He gave a very famous commencement address and he asked me to help.

Why did you turn down Pixar?

Did you end up writing his speech?

David Fincher was originally attached to direct the film. Did it change when Danny came on board?

Sorkin: There was never a director attached to it but Danny. Because I had done The Social Network with David, it was natural David would be the first person we went to. But David was never the director of the movie.

Boyle: I’m a big Fincher fan and when this came about they were saying, “You don’t want to do that. Wasn’t Fincher attached to that?” I thought what he’d done with The Social Network ― and what Aaron had done ― was extraordinary. It’s one of my favourite films and I was proud to try and see if I could do it as well. Aaron gives you 185 pages of this extraordinary starburst of dialogue and relationships ― then it’s yours, and what are you going to do with it? You’re on this planet to do stuff like that.

Sorkin: It’s a terrible thing to do to a director, it really is.

Boyle: The stories about these tech titans are crucial. They have to be answerable to somebody. They’re not answerable to governments any more, they’re beyond governments, they’re reaching out to help governments. At some point, there’s going to be a price to pay for that. It’s important to explore these people who are moulding the world, now. It’s going to be too late in 20 years. You’ve got to look at them and drag them back to the planet, because they appear to be in a stratosphere beyond in terms of money and success and power.

They’ve got to be dragged back, Shakespearian style, to whatever their flaw is. You [Aaron] should write another one. It feels like a trilogy to me. Sorkin If you’ll direct it, I will. There’s a value added with Danny. His movies are a sensation. He’s also a stage director and that has a big appeal to me because these are plays that are meant to be turned into movies. If there ever was a person who can do that, it’s Danny.

What was the rehearsal process?

Boyle: We rehearsed it as three parts. We’d rehearse part one, shoot it and then stop. Then we rehearsed part two and shot it. It seems very sensible but it’s insane in the film world. It gave the actors ownership, which is what I was after. It’s such a mountain they’re looking at. You divide it down and give them ownership of it.

Sorkin: What Danny’s talking about is very important. It’s more than obvious Michael had a lot of words to say. But it’s more than memorising a lot of language ― you have to own it, you have to be able to say these things like it’s your phone number. Danny would rehearse, just like a play, in a rehearsal studio, with the set taped out on the floor. I’ve never seen this on a movie before. He would do run-throughs of an entire act. It was amazing.

Why did you choose to shoot in three different formats?

Boyle: Part one felt punkish, it felt like it had this rawness that 16mm gives you. Part two is liquid, it’s this terrible river of intention that’s hidden from you, and 35mm film is beautiful for that. Then the most obvious one is the digital world. He’d started Pixar; they’d already released Toy Story. So you move on to the Alexa, the digital camera, which translates as infinite possibilities.

You also insisted on filming in San Francisco. Why was that so important?

Boyle: You’ve got to be outrageously adamant why you’re doing it in San Francisco, because they were all interiors, there were hardly any exteriors, and they were going, “You can shoot in San Francisco for two days at the end.” There is something about film that… absorbs influences from the people you cast, the crew. So you think, “This is the town where this world was made, we should go back there and film in the real garage.” Which is what we did. It is literally Bethlehem, the actual garage where these two guys sat and invented the future. An executive can tell you it doesn’t mean anything, but it does.

There’s a moment towards the end where Steve washes his feet in a toilet. Where did that come from?

Sorkin: Steve did do that. But in the movie that’s a Danny/Michael thing. It’s not indicated in the script.

Boyle: You do your research and you hear all these stories. You’ve got this amazing script and that leads you to details you can add in to make it feel like there is a hinterland around these people. Also, I am very good at toilet scenes.

Sorkin: That’s Danny’s version of Hitchcock appearing in all his own movies. He’s got to have a toilet.

In addition to talking to Steve Wozniak (who was present during the rehearsals and filming), Joanna Hoffman, John Sculley and Andy Hertzfeld, Sorkin (and Boyle) met Steve Jobs’ daughter Lisa, who is now an essayist living in New York.

“She was sort of the heroine of the writing process for me,” says the screenwriter. “I’m the father of a daughter and I had a difficult time getting past [Steve’s] behaviour as a father. I didn’t care how many things he invented, if he’s behaving this way as a father I’m going to have a difficult time making a movie protagonist out of him, even an anti-hero.”

Meeting Lisa gave Sorkin a way to humanising the character. “She would tell me a not-very-flattering story about her father and then point to it and say, ‘But you could see how he really loved me because he did this or said that,’ so that I understood Steve wasn’t a one-dimensional monster, that she was able to see goodness in him as a father. I thought, ‘If she’s able to see that, who am I to judge him? I’ll go through her and write it that way.’”