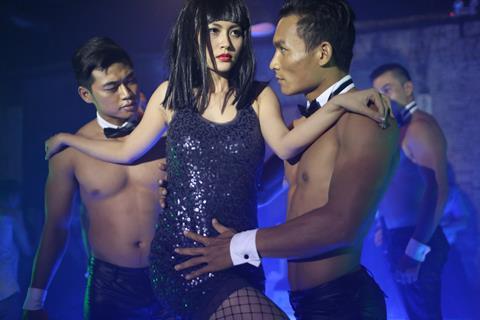 A beautiful film about people who seem too beautiful for the environment they live in, Big Father is shot through with desire and nostalgia, and it does capture something about an age of freedom without responsibility, when anything seems possible.

Beautifully shot and radiating youthful cool and insouciance, Big Father is however too open-ended and randomly plotted to convince either as a drama or as a particularly resonant exploration of the themes it touches on, which include country versus city values, homosexuality and the taboos that continue to surround it in Vietnam, and the way the materialistic need for status symbols fosters a cycle of debt.

Big Father opens with a shot, from an approaching barge, of a Saigon riverside shantytown. The margin between land and water – and, later, the mud that represents a mingling of the two – will be a constant theme, though not one we quite know what to do with. Is the river that brings Mr Sau (Phong) from the rural hinterland on a visit to his son Vu (Hoang) a symbol of Vietnam’s fluid, uncertain contemporary society? Or of an increasingly fragile lifeline between country and city?

Vu is a sulky, introverted photography student – an old-school one, as he still develops his own prints in a darkroom – but he doesn’t seem particularly driven; in fact, it’s difficult to know what’s going on inside him. He shares a room with Thang (Vinh), a muscular, impulsive barman who works in a nightclub alongside sultry dancer, singer and crack addict Van (local star Do Thi Hai Yen, who featured in The Quiet American). Vu is attracted to Thang; Thang seems to be in some sort of casual relationship with Van.

Other members of the loose group of friends include a strolling musician and his sister, and a factory worker who has a vasectomy and uses the government incentive money to buy his girlfriend the latest model of cellphone. It’s only from this and a few other hints that those familiar with Vietnam will be able to date the action to the end of the 1990s or beginning of the new millennium – not long after the lifting of the US trade embargo, at a time when the country was undergoing a fast and in some cases traumatic process of modernisation.

Skipping back and forth between characters, demanding some work on the part of the audience to place and relate them, Big Father is as cool and difficult to pin down as its three main characters who, after fleeing from city loansharks, head for Mr Sau’s country house, where the mood turns a little Apichatpong Weerasethakul, with mangrove groves and a mudbath sexual encounter suggesting, perhaps, archaic natural energies.

Or perhaps not. A beautiful film about people who seem too beautiful for the environment they live in, Big Father is shot through with desire and nostalgia, and it does capture something about an age of freedom without responsibility, when anything seems possible. But ultimately, it caresses the surface too much, and ends up feeling like a pretty, poignant style exercise.