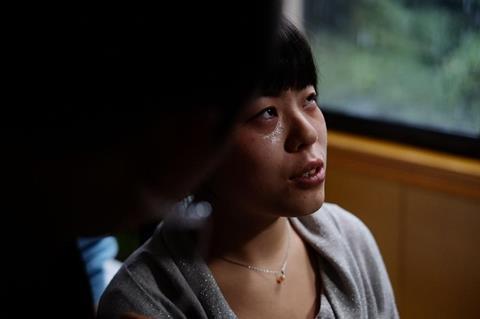 Tui Na, the Chinese title of Blind Massage, is a form of therapy often practiced in China’s medical massage centres for the blind. There are over 50,000 licensed blind masseuses in China, and Bi Feiyu’s best-selling novel, which Ma Yingli has adapted for the big screen, focuses on the lives and loves of the practicioners in one such Nanjing centre. It’s not hard to figure out why Lou Ye (Mystery, Shouzou River) was technically attracted to this project, and he throws every angle of light and darkness at its visual ebb and flow, from jarring moments of high melodrama to the more gentle, blurred edges of love.

With its cast of characters making their hesitant way through the Nanjing rain, it calls to mind the downpours of Mystery, which seems like an obvious commercial parallel.

With the book well-known in China, coupled with some bravura performances from blind and sighted actors alike, Blind Massage stands to perform well in the domestic marketplace. International reaction may be more divided, however, with some seeking a more coherent piece. While on the one hand, Lou abandons restraint to visually stretch the envelope in an exciting if occasionally confusing way, Blind Massage also has a tendency to trip over into high melodrama. With so many of the ensemble cast given a bloody resolution, Lou’s screenplay can often be careless with his hard-earned credibility.

Lou Ye has enjoyed a chequered history with censorship at home even as he has found consistent support amongst international festivals and financiers. Blind Massage, following on from 2012’s Mystery, is an officially-approved production, however, world premiering in Berlin’s Competition and co-produced by the Shaanxi Culture Industry with Lou’s own Dream Factory. With its cast of characters making their hesitant way through the Nanjing rain, it calls to mind the downpours of Mystery, which seems like an obvious commercial parallel.

Blind Massage fields an ensemble cast of blind masseurs, some played by the sighted, most notably Lou Ye’s regular collaborators Guo Xiaodong and Quin Hao. Spring Fever’s Xuang Xuan and Huang Lu play the angry young blind boy Xiao Ma, who kicks off the film with a botched suicide attempt, and his prostitute lover Mann. Mei Ting is Du Hong, the centre’s beautiful masseuse. They share scenes with blind actors including Zhang Lei as Kong, who has a natural ease.

Guo, whose relationship with the director stretches back to Summer Palace, and Quin, who appeared in Spring Fever, play old college friends who are reunited in the bustling, professional centre run by Dr Sha (Qin). Dr Wang (Guo) has arrived in Nanjing with his partially-sighted fiancé Kong, but their relationship is troubled – her parents will never accept a fully-blind man as her husband, while his brother and parents are in trouble with loan sharks.

Dr Sha, a hopeless romantic and poet in a fruitless search for love, falls hopelessly for Du Hong, who is attracted to Xiao Ma in this slightly soapy scenario. All stories will come to a violent resolution, though, as You’s camera drifts in and out of focus, zooming between light and dark, greys and reds. “The blind are in the light, while the sighted hide in the shadows,” concludes the screenplay, and it is indeed a poignant observation. You Le’s camera illuminates and shades their existence in all its heightened emotions.

Screenplay: Ma Yingli, from the novel by Bi Feiyu