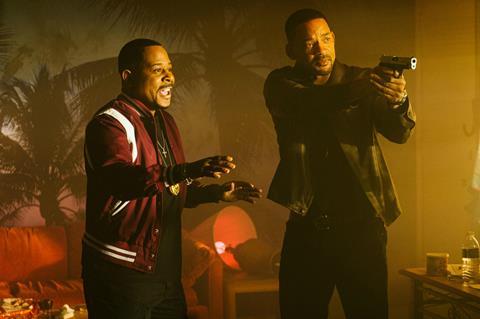 After a 17-year break Columbia Pictures introduced the latest instalment in the Bad Boys action franchise and reaped early rewards as Bad Boys For Life set a franchise-best $38.6m to lead the weekend’s international box office.

Awards season heavyweight 1917 climbed to $62m internationally and $139m worldwide through Universal and Amblin Partners in the second session, while Universal’s Dolittle stands on the cusp of $50m globally.

Will Smith and Martin Lawrence returned to the Bad Boys action franchise after a 17-year break and the results were highly encouraging as Bad Boys For Life set a franchise record $38.6m international bow. That complemented the $59.2m number one North American debut and both sets of results contribute to an estimated $97.8m global weekend.

The action thriller swept into Germany on $5.1m including previews for top spot, and in other table-topping performances arrived in the Middle East on $5.1m (and number one in all 12 markets), Australia on $3.9m, Mexico on $3.8m, and Spain on $2.2m. Bad Boys For Life opened in South Korea, Taiwan and Indonesia on $3.2m over five days, $1.7m and $1m, respectively. Upcoming key markets include France on January 22, Russia on January 23, Brazil on January 30, Japan on January 31, and Italy on February 20.

Columbia Pictures’ Jumanji: The Next Level has grossed $709m at the worldwide box office and $438m internationally. Markets outside North America delivered $17m with a Brazilian debut earning $4.3m to finish 10% ahead of that of Jumanji: Welcome To The Jungle.

1917, Saturday night’s winner of the best film at the Producers Guild of America awards, brought in another $26.1m through Universal and Amblin Partners territories over the weekend as the international tally climbed to $61.9m and worldwide added $48.2m for $138.7m.

Universal territories contributed $8.6m for a $9.3m running total, fired up by a $3.9m number one debut in France, a $1.9m number two debut in Germany, and a $1.4m number two launch in Mexico.

Amblin Partners territories accounted for $17.5m weekend as the tally rose to $52.7m. In a cluster of second weekend results in territories handled by eOne, the First World War thriller stayed top in the UK on $8.4m following a 13% drop for a $24.5m running total; added $2.5m in Australia to reach $7.2m and rank second; added $1.6m in the Netherlands for $3.9m to rank number one; and added $1.5m in Spain for $4.3m to rank second.

Dolittle, the family release starring Robert Downey Jr that has been assailed by damning reviews, coaxed $17.2m out of international audiences to push the early tally to $27.3m and worldwide to $49.8m.

Star Wars: The Rise Of Skywalker grossed $10.9m for $534.6m internationally. The sci-fi spectacle that crossed $1bn worldwide last week stands at $1.026bn at the global box office. Frozen II brought in a further $12m internationally to boost the tally to $936.2m, and worldwide to $1.401bn.

Knives Out earned $3.3m internationally for a $131m running total, and $277m worldwide after eight weeks. The whodunnit added $1.4m in Germany where it ranks third and climbed to $6.8m after three weekends. China, the UK and Australia are the top three markets on $28.1m, $16.3m and $8.9m, respectively, and Japan will be the final market to open on January 31.

Gangster caper The Gentleman grossed $2.5m over the weekend, raising the running total to $18.4m from its first three markets. At this stage, Miramax International sources said Guy Ritchie’s film tracks 63% ahead of The Man From U.N.C.L.E., 51% ahead of The Hitman’s Bodyguard, and 11% ahead of Knives Out.