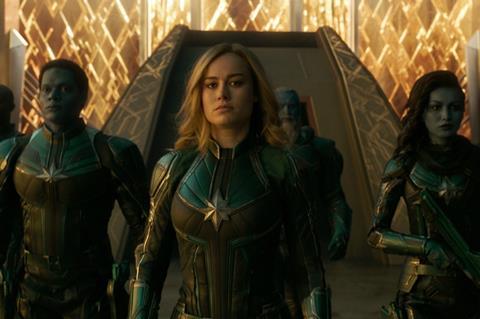 Captain Marvel has crossed the $600m barrier at the international box office and stands at $938.1m worldwide as it climbs towards the $1bn mark.

Meanwhile Jordan Peele’s new horror Us scored the highest opening day of all time for a foreign horror film in South Korea via Universal Pictures International, opening top on $1.15m on Wednesday (27) to rank ahead of local hit Money and new arrival Dumbo. The result tracked 57% ahead of the opening day of Peele’s breakout feature debut Get Out in 2017. That film earned $6.1m in opening weekend and finished on $15.6m in South Korea.

The horror film starring Lupita Nyong’o and Winston Duke stands at $24.1m internationally and opened in Australia on $480,000 on Thursday, ahead of Dumbo and tracking 246% ahead of Get Out, which produced a $1.4m opening weekend two years ago en route to a $4.6m final gross. Us opens in a further 13 territories this weekend, including Russia, India, and Thailand.

DreamWorks Animation’s How To Train Your Dragon: The Hidden World stands at $246m, and Fighting With My Family $2.4m from Universal territories. Mary Queen Of Scots opens in Mexico and Argentina, Welcome To Marwen debuts in Germany and Austria, and Boy Erased arrives in France.