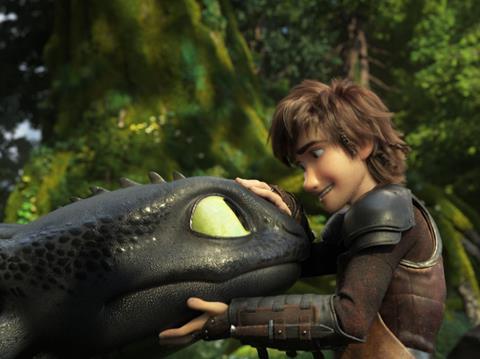 How To Train Your Dragon: The Hidden World

M Night Shyamalan’s Glass ruled a muted international session in the last frame and will fly past the $100m mark through Buena Vista International, although DreamWorks Animation’s How To Train Your Dragon: The Hidden World is expected to soar higher at the weekend.

Genre trilogy finale Glass starring James McAvoy, Samuel Jackson and Bruce Willis has reached $97m but with no new territories to exploit it will likely cede the crown.

Universal Pictures International executives are stepping up on How To Train Your Dragon: The Hidden World which until now has earned $45.1m through a staggered roll-out. The family animation gets serious this weekend with launches in 24 territories led by the UK, where the second film in the series opened on $13.3m five years ago en route to $41.5m.

The other debuts to watch take place in Italy, where the predecessor opened on $2.4m and finished on $10.7m, and South Korea, which delivered $6.1m in opening weekend and grossed $22.6m. The Hidden World also arrives in Singapore, Hong Kong, Argentina, and Thailand, all of which delivered strong numbers last time the franchise flew their way.

Disney’s Ralph Breaks The Internet on $280.4m opens this weekend in Finland, Norway and Sweden, while Mary Poppins Returns on $155.4m touches down in Japan, Taiwan and Hong Kong.

Fox International’s runaway hit Bohemian Rhapsody has enjoyed plenty of attention on the way to its $614.2m international perch, although last weekend’s $21.8m debut of Once Upon A Deadpool in China was the distributor’s top earner. A solid hold there will propel the family-friendly version of the comic-book adaptation starring Ryan Reynolds well past $450m, a number that includes the earlier box office of its R-rated inspiration, Deadpool 2.

This weekend The Favourite on $27.9m gets a significant push as Yorgos Lanthimos’ Restoration Comedy farce starring the Oscar-nominated trio of Olivia Colman, Emma Stone and Rachel Weisz venture into 10 markets, among them Mexico, Russia, South Africa, and the director’s native Greece, where it is expected to generate a healthy box office.

The drama Can You Ever Forgive Me? featuring Oscar-nominated performances from Melissa McCarthy and Richard E. Grant debuts in the UK, its first international market. Family adventure The Kid Who Would Be King starring Patrick Stewart has mustered $3.7m and arrives in a handful of Latin American and Caribbean markets led by Brazil, where family films can prosper. Bollywood rom-com Ek Ladhi Ko Dekha Toh Aisa Laga starring Anil Kapoor opens in India and the UK.

Michael B. Jordan boxing drama Creed II has reached $79.8m for Warner Bros Pictures International, well above the 2015 original’s $63.4m final gross. The sequel should has a few more rounds to go and will cross $100m before long, especially given that it opened impressively in Italy, Spain and Germany last weekend. Clint Eastwood’s drug drama The Mule stands at an early $17.6m and arrives in Germany.

A Star Is Born may not have fulfilled its early awards season promise – although there is still The Oscars to come on February 24 – but audiences have voted and the romantic drama remake with Bradley Cooper, Lady Gaga and Sam Elliott has reached $208.5m, and $415m worldwide. Fantastic Beasts: The Crimes of Grindelwald has earned $494.2m, and Aquaman stands at more than $778m.

Spider-Man: Into The Spider Verse has swung to $171.1m through Sony Pictures Releasing International, while Escape Room on $35.5m opens in UK, and A Dog’s Way Home has reached $11.9m.