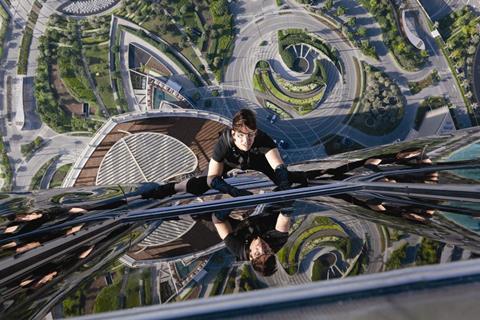 Paramount’s Mission Impossible: Ghost Protocol came out on top at a keenly contested UK box office, grossing £2.2m from 517 screens at an average of £4,300.

The fourth instalment in the popular franchise stands at £13.1m after two weeks, and is only £2.3m off the cumulative of previous episode Mission Impossible 3.

Sherlock Holmes: A Game of Shadows move up one spot to second for Warner Bros’ in its fourth week, taking a further £2.163m from a week high 518 screens at a location average of £4,177.

Pathe’s The Iron Lady impressed on debut, narrowly missing out on top spot despite playing on 78 fewer screens than its two nearest rivals.

Phyllida Lloyd’s Margaret Thatcher biopic took £2.151m from 439 screens at an average of £4,901. The opening compares well to similar fare such as Pathe’s The Queen, which opened surprisingly poorly on £856,275 on its way to a strong £9.4m.

Unsurprisingly, the drama came into its own on Sunday (which attracts an older demographic), when it took a day-high £572,909 and also scored the biggest Monday figure, £80,000 ahead of its nearest rival. Another good weekend is expected.

Sony’s The Girl With The Dragon Tattoo held well in fourth on £1.6m for £7.9m, while newcomer Goon opened decently in seventh for eOne, managing £728,286 from 358 screens.

The Artist leapt to 106 screens in its second week but proved that it could still do with more, grossing a healthy £629,495 at a week-high screen average of £5,939.

This week sees saturation releases for Disney’s War Horse and Fox’s The Darkest Hour as well as wide releases for Momentum’s Shame and Stealth’s Margin Call.