DECEMBER 14 UPDATE: Lionsgate’s YA adaptation was confirmed on Monday as the box office champion. 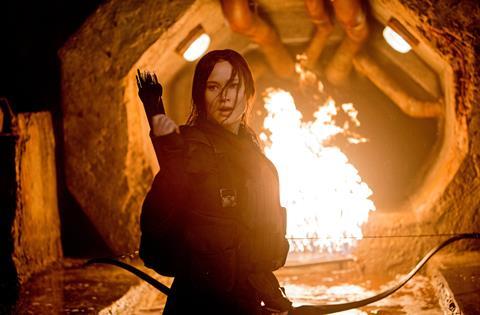 Mockingjay – Part 2 ranked number one for the fourth consecutive weekend in Australia, Brazil, Germany and the UK, where Lionsgate said it became the first film to achieve the feat since Les Miserables in 2012.

In Germany the film overtook its predecessor’s lifetime total to become StudioCanal’s biggest release ever.

Lionsgate released details of the early performance of Point Break, which added $12.3m from eight Asian markets at the weekend and climbed to $34.5m.

The action thriller has amassed $30.3m in China after $10.2m in its second weekend – Lionsgate sources claim this is the lowest weekend-to-weekend drop of the year so far. The film ranks second.

Surprise – Journey To The West concluded the session with an estimated $17m haul that saw it finish just behind Lionsgate’s YA adaptation.

Surprise could prosper for a while as China is one of the few places on earth to avoid Star Wars: The Force Awakens when it arrives day-and-date with North America later this week in the most anticipated debut of the year. Star Wars opens in China on January 9.

UPDATE: The Good Dinosaur grossed a confirmed $15.3m from 47 territories representing approximately 61% of the international marketplace and stands at $79.2m.

The Pixar release was in the running for top spot in the UK and ranks number one for the third consecutive session in Argentina, Mexico and Chile. It is now the highest grossing Pixar release ever in Vietnam on $1.3m.

UPDATED: Spectre brought in a further $11.8m including MGM markets from 94 markets as the international running total soared to $630.2m and $821m worldwide.

James Bond stayed top in Japan for the second weekend as $2.3m boosted the tally to $12.5m, while the superspy added $2.3m for $64m in Germany after six.

UPDATED: Ron Howard’s seafaring adventure In The Heart Of The Sea took $13.7m from 52 countries for an early $41m and added $1.9m for $5.3m in South Korea where it ranks number two in the second session.

UPDATED: Ocho Apellidos Catalanes (Spanish Affairs 2) became the biggest film at the Spanish box office for the year-to-date last week and stayed top in Spain for the fourth consecutive weekend on $2m for $28.9m. The original film remains the biggest film of all time in Spain on $77m.

Legendary and Universal’s Krampus grossed $3.7m from 38 territories for an early $8.8m and opened in 13 this weekend.

Babysitting 2, the sequel to the French comedy hit that Universal co-produced in 2014, is holding strong at number one in France for the second week and added $3m for $8.6m.

The Dressmaker, the Australian hit comedy released by Universal in Australia and New Zealand that won five Australian Academy Awards on Tuesday, stands at $13.4m after seven weekends. Steve Jobs has climbed to $6.9m from 21.