JUNE 1 UPDATE: San Andreas shook up global box office at the weekend, taking the lead with a $118.5m worldwide haul that featured $63.9m from international debuts and a $54.6m number one launch in North America. 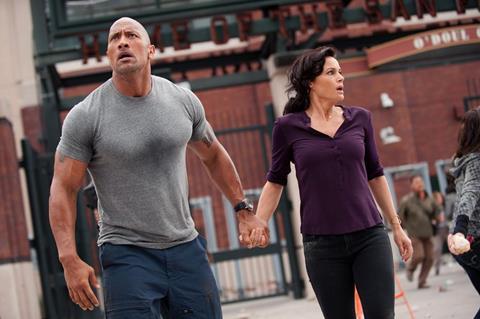 UPDATED: The earthquake disaster film starring Dwayne ‘The Rock’ Johnson was in bullish form, storming to the top in 55 of its 60 markets as it drew approximately 10.7million admissions from 15,420 screens.

Mexico led the way as San Andreas took $10.1m from 3,150, claimed 75% share of the top five and delivered the biggest debut for a disaster film and Warner Bros’ second biggest opening weekend.

The film grossed $11m on 2,300 screens across Asian markets including Taiwan, Thailand, Malaysia, Philippines, Singapore and Indonesia and arrives this week in China and South Korea.

Mad Max: Fury Road produced a further $21.6m and close to three million admissions from 10,220 screens in 70 markets to boost the international running total to $165m.

Fury Road ranks second in Australia on $2m from 389 for $12.9m heading into the Queen’s Birthday holiday and second in Brazil where $1.3m from 675 elevated the tally to $9m.

Tomorrowland surged to $70m following a $29.3m session that delivered a $13.8m debut in China over the first six days.

The early global running total for the film, which reportedly carries a $190m price tag before marketing costs, stands at $133.2m with Brazil and Japan to open this week.

Cinderella stands at $333.4m and remains the biggest release in Japan on $41.3m for the year-to-date.

The sequel opened in nine territories this weekend led by Italy with a $319,000 number five debut in 261 sites that doubled the $163,000 debut of the 2012 original, which has not been adjusted for inflation in this article.

South Korea produced $401,000 from 246 venues in eighth place and the result beat that of the original by a factor of seven.

A projected $2.9m in the UK was on course to boost the tally to $22.8m after three weekends, while $1.3m in Germany resulted in $9.1m after the same amount of time.

There are 12 territories to go including China on June 25.

Fast & Furious 7 has opened everywhere and remains active in 56 territories in its ninth weekend of release. The weekend’s $1.7m gross elevated the running total to $1.157bn internationally and $1.507bn worldwide. Ex Machina stands at $10.6m from 11 and Unfriended $11.7m from 12.

UPDATED: The Melissa McCarthy spoof Spy consolidated early gains across the Asia-Pacific region one week ahead of the North American release, when the film will go out day-and-date in a further 53 international markets.