NOVEMBER 2 UPDATE: The latest 007 instalment from EON Productions, MGM and Sony has smashed records in almost every one of the six markets it debuted in this weekend. 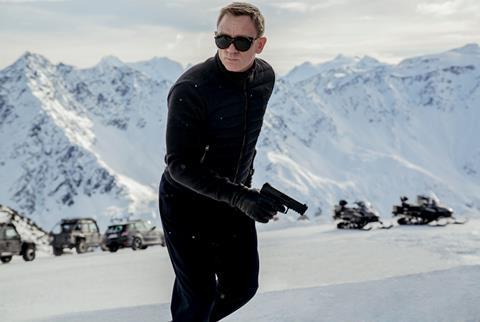 UPDATED: Spectre has raced to $80.1m in its first seven days, of which a confirmed $67.2m comes via Sony and the balance from MGM territories.

The UK led the way on $63.2m (£41.7m) for the biggest seven-day gross in the territory, overtaking the previous £23.9m mark set by Harry Potter And The Prisoner Of Azkaban. The Friday to Sunday portion accounted for $30.6m.

In the Netherlands, Spectre grossed $3.4m rising to $3.9m including previews to beat the record set by franchise predecessor Skyfall.

In the Nordic region the spy thriller beat Skyfall in every active market and brought in a total of $12.9m via MGM licensees. The new release set records in Denmark on $4.2m over three days, Norway on $2.9m and Finland on $2.7m. Sweden produced $3.2m.

UPDATED: Buoyed by number one debuts in Russia, Brazil and Italy and Russia, The Last Witch Hunter plundered $21.1m from 77 markets to propel the early running total to $39.4m.

The adventure thriller added $4.3m for $13.4m after two weekends in France where it has already overtaken the lifetime total of Ridley Scott’s Prometheus – the director flies to Australia to shoot the sequel this week after he receives his star on the Hollywood Walk Of Fame – and Interstellar.

UPDATED: Paranormal Activity: The Ghost Dimension grossed $13.9m from 46 markets to reach an early $38.3m and eclipse the troubled North American performance, where the studio’s revenue-sharing theatrical-digital pact with AMC Theatres and Canada’s Cineplex Entertainment has led to boycotts by several chains.

The horror film’s overall tally has overtaken that of previous instalment Paranormal Activity: The Marked Ones and the film opened top in five of 13 new markets and broke the franchise record in eight.

Scouts Guide To The Zombie Apocalypse, the other film in the Paramount-AMC-Cineplex experiment – which opened dismally in North America this weekend on $1.8m from 1,509 theatres – generated $750,000 from 10 markets an arrives this week in the UK, Australia and New Zealand, among others.

The Day Of The Dead weekend saw the Gothic horror open higher than del Toro’s Pan’s Labyrinth and The Devil’s Backbone, as well as other horror titles like The Orphanage, Mama, The Woman In Black and Shutter Island.

The film grossed $2.7m overall and opened at number one in Australia on $2.5m including previews and debuted top in New Zealand on $214,000.

Everest has scaled $134.5m and opens in China this week followed by Japan on November 6.

Straight Outta Compton stands at $38.7m and is projected to cross $200m worldwide on Monday.