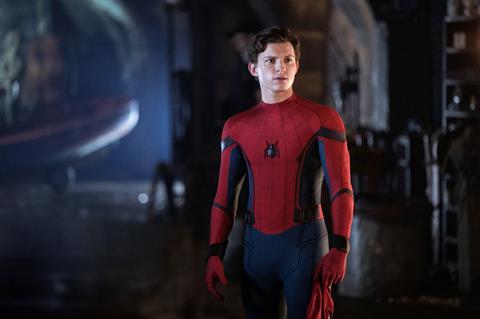 UPDATED: Propelled by last week’s $157m debut in China, Japan and Hong Kong, Far From Home opened in a further 63 markets, grossing $236.1m for a $392.7m international running total and securing top spot in 63 out of 66, and breaking Sony all-time opening records in 35 markets. The tentpole debuted in South Korea on Tuesday on $33.5m for the fourth highest Thursday-Sunday Hollywood opening of all-time, and arrived in the UK on $17.8m over six days.

Spidey toppled Sony’s all-time record in Mexico with a $13.4m four-day mark that also ranks as the second highest debut for a stand-alone superhero film through Friday-Sunday, and opened on $12.1m in Australia following the Monday debut, and arrived in Russia on $9.6m.

By region, Far From Home stormed into Asia on a franchise record $78.7m and ranked number one everywhere, scoring the fourth highest debut ever in Indonesia on $9.8m, as well as $8.3m in India, $6.2m in Taiwan, $5.7m in Philippines, and $4.6m in Malaysia. Latin America generated a franchise record $34.9m opening weekend and 10 number one results including $8m in Brazil, where the national football team prepares to play Peru in the final of the Copa America on Sunday.

Spidey earned $48.2m across Western Europe and ranked number one across the entire region led by the UK. France delivered $8.3m for the third highest opening of the year-to-date, followed by Germany on $5.8m including previews, and Spain on $4.4m. The Middle East generated appromimately $7.8m and 13 number one debuts led by UAE on $3.3m.

Far From Home earned $29.1m worldwide on IMAX in the best July and Sony debuts and stands at $44m overall.

The $185.1m North American debut delivered the best six-day opening over the Fourth of July holiday, an all-time six-day opening record for Sony Pictures, and the best six-day opening for a Spider-Man film. The first film in the Marvel Cinematic Universe since Avengers: Endgame broke records earlier in the year stars Tom Holland, Samuel L. Jackson, Zendaya, and Jake Gyllenhaal, and is directed by Jon Watts. The film is a Columbia Pictures, Marvel Studios and Pascal Pictures production.

Men In Black: International grossed $3.7m from 65 markets and stands at $172.5m internationally and $244.5m worldwide. The film is presented by Columbia Pictures and co-financed by Tencent Pictures and Hemisphere Media Capital.

UPDATED:  Disney-Pixar’s Toy Story 4 brought in $79.6m worldwide as the animation hit climbed to $651.9m, earning $43.1m from 45 international markets for $343.4m. It stands at $60m in the lead market Mexico, and $45.7m in the UK, where after 16 days it has become the third biggest release of the year. Aladdin reached $602m internationally after crossing $900m worldwide last week. The fantasy adventure starring Mena Massoud and Will Smith grossed $24.8m for $922.7m globally, and added $17.3m for $602m internationally.

Danny Boyle’s musical romance Yesterday starring Himesh Patel and Lily James brought in a further $7.7m from 35 to boost the early tally to $20.m, and $56.2m globally. It opened in seven, led by France on $1.3m in fourth place, and Spain on $1m in third. The UK led holdover business in the second session on $2m for $7m and Australia delivered $1.6m for $4.9m. Yesterday opens in Germany this week.

UPDATED: Annabelle Comes Home brought in a further $20m from 69 international as the tally climbed to $84.3m, and the worldwide running total reached $134.2m. The horror added $2.1m in its send session in Mexico for $12m and ranks third.

Italy led the new markets on a $1.7m number one finish, ranking second in the Conjuring universe behind The Nun, Germany delivered $1.4m in third place, and Hong Kong produced $799,000 in second on par with The Nun and ahead of the other Conjuring titles.

Rocketman grossed $1.5m in 44 markets for an $84.7m international running total with Japan to come on August 23. Australia led the holdovers on $390,000 for $13m after six sessions. The Elton John biopic starring Taron Egerton has delivered $28.6m in the UK after seven, $5.3m in Germany after six, and $5.7m in France after six.