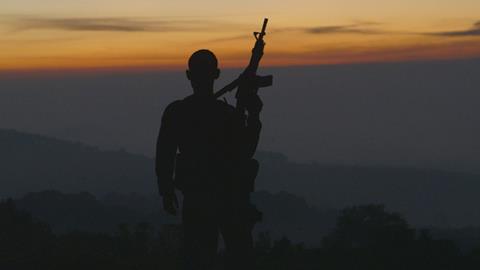 In the documentary Cartel Land, the US-Mexican border is a war zone on both sides.  And the good guys aren’t winning.  Border stories, like bodies in a crime wave, just keep on coming into the marketplace, with plenty of gore to stoke the audience’s expectations for violence and drama.  There’s a high body count here, too.

The film is two separate stories, each focusing on a man who speaks eloquently and claims to be misunderstood by his government – nothing if not timely for the US, but structurally more in the style of a doc-report, albeit one with tactile energy.

Yet Matthew Heineman does break the mold in Cartel Land and gets inside citizens movements – better known as vigilantes – which overturn the cartels’ monopoly on violence, for a while. His documentary reminds you that it takes more than earnest people with guns to win a war, especially a war on drugs.

Ordinary men standing up to criminals are the stuff of westerns (not least a life-supporting genre for Clint Eastwood) and Heineman (whose last documentary was about the US health care system) has found characters who iconize the human toll and human folly of conflicts on both sides of the border.

Deftly edited, and filmed with a feel for the deadly volatility of drug violence, Cartel Land should find a television audience (A&E is a producer) for its drama of men and some women who fight back. It will also test the public’s appetite for drug trade and immigration sagas.

The film is two separate stories, each focusing on a man who speaks eloquently and claims to be misunderstood by his government – nothing if not timely for the US, but structurally more in the style of a doc-report, albeit one with tactile energy. Half of the film is in Spanish, which bolsters its credibility, but could keep it from getting beyond the festival circuit.

On the American side, there is ex-vet Tim “Nailer” Foley of the militia Arizona Border Recon, who arrived in the majestic desert after private wars with drugs and alcohol and jobless years that he blames on immigrants. Looking like a gaunt aging Matthew McConaughey, he’s armed with a rifle and calls his new mission a David and Goliath struggle He sees embattled white Americans like himself in the David role.

Mexicans might find that notion dubious, especially when Goliath’s troops that Foley finds in the vast landscape amount to a migrants trying to make their way north.

In Mexico, 1500 miles away, higher stakes give the doc’s other story an explosive power. Dr. Jose Mireles, a tall small-town physician in the state of Michoacan - with a moustache, a hat and an uncanny resemblance to the former Mexican president Vicente Fox - watches as citizens opposed to a local cartel turn up hanged or beheaded.  Mireles inspires and arms them to fight drug dealers. In the name of law and order, things get bloody.

If the American side of Cartel Land is mostly waiting and posturing (“we’re not a hate group”), the Mexican side is a frenzy, as Heineman and crew race after Mireles’s men, who cleanse their territory with a vengeance. “This is not the US,” one of them tells a suspect who anticipates torture. These wrenching sequences make you wonder what Heineman didn’t show.

That reality check on righteous violence gets ominous when Mireles almost dies in a mysterious plane crash and his men veer into excess. Punishing and governing turn out to be different tasks.

Cartel Land ends up pointing where it began. Mexicans in Michoacan are still terrified of men with guns. Americans with rifles and apocalyptic rhetoric lie in wait for fearful men who speak Spanish. The austere landscapes remain the same.