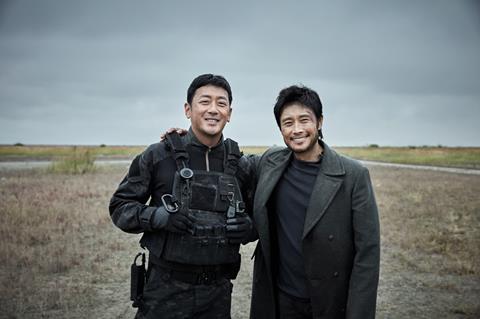 Co-directed by Lee Hae-jun (Castaway On The Moon) and Kim Byung-suh (Cold Eyes), the film is produced by Dexter Pictures, the company behind the Along With The Gods hit franchise. It also features Don Lee (aka Ma Dong-seok from Train To Busan), Jeon Hye-jin and Bae Suzy.

Set for local release December 19, the film is set to open December 20 in the US, December 24 in Taiwan, January 1 in Hong Kong, January 2 in Singapore and Malaysia, January 8 in Indonesia, the day after in Thailand and Australia, and January 31 in Vietnam.

The film follows the drama that ensues when Korea’s tallest volcano, Baekdusan, sitting on the China-North Korea border, unexpectedly erupts and the peninsula is left in shambles. Seismologist Bong-rae (Ma) suggests a way that could potentially stop a further explosion and In-chang (Ha) is tasked with seeking out and teaming up with rogue elite North Korean officer Jun-pyeong (Lee Byung-hun) to stop the imminent devastation.