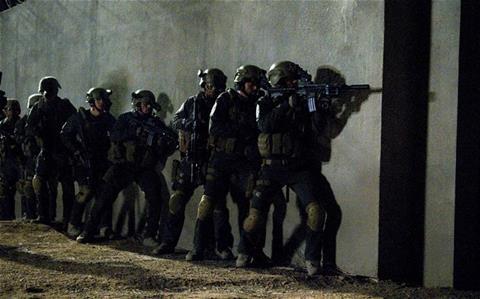 Designed as a pre-US election spoiler in advance of Kathryn Bigelow’s Zero Dark Thirty, action orientated film Code Name: Geronimo was screened on the National Geographic Channel in the US – where it was titled SEAL Team Six: The Raid On Osama Bin Laden – but gets a theatrical release in the UK and several other territories which aren’t due Bigelow’s rather more big-budgeted film until early 2013.

It is all pretty much by-the-numbers stuff as the team are finally informed who their target will be, with the nightime raid on the compound familiar to anyone who as seen Act Of Valor or an episode of The Unit.

Whether its release will have any impact on Zero Dark Thirty is debatable – in the UK has a limited release prior to a DVD push on December 24 – but it will more likely appeal to those who liked Act Of Valor and other more simplistic military actioners rather than anyone interested in background to the search for Osama Bin Laden.

The film’s National Geographic Channel screening attracted more controversy because of its rushed pre-election transmission and the role of executive producer Harvey Weinstein (who happens to be a staunch Obama supporter) rather than its content. But even taken as a quickie film designed to piggyback the raid itself it offers modest entertainment.

Whereas Bigelow’s film barely features Obama beyond a photograph or television image, Code Name: Geronimo features his visage – in television interview segments and photographs – in resolute appearance, with the story padding its recreation scenes with straight-to-camera interviews and news-style footage.

While Bigelow’s film is largely about the hunt for Bin Laden, with the actual raid only featuring for the last 40 minutes, Code Name: Geronimo focuses on the US Navy SEAL team responsible for the death of the al-Qaeda leader during the attack on his hideout in Pakistan.

The core story follows the team – who have nicknames like Stunner, Mule, Trench and Cherry – as well as the CIA analysts who provided the information about Bin Laden’s whereabouts. William Fichtner (who played a special forces type in Black Hawk Down) gives the film a bit of class as CIA agent Mr Guidry, while Cam Gigandet (who starred in the first Twilight film as well as Easy A and Never Back Down) and hip-hop star Alvin ‘Xzibit’ Joiner (who starred in Derailed) are on-hand to provide the muscle as members of the SEAL team.

It is all pretty much by-the-numbers stuff as the team are finally informed who their target will be, with the nightime raid on the compound familiar to anyone who as seen Act Of Valor or an episode of The Unit. Director John Stockwell (who made Blue Crush and Crazy/Beautiful) keeps things simple, while Paul Haslinger’s score helps keep the pace up, but in the end Code Name: Geronimo feels like pretty much what it ended up being – a hastily made television film.