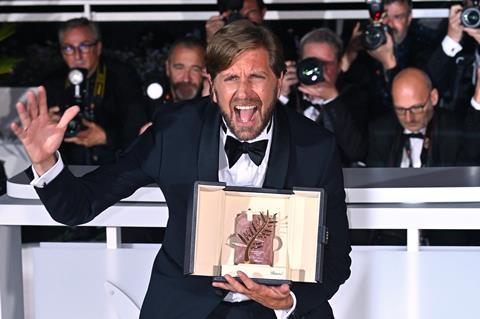 Ruben Ostlund collecting his Palme d’Or for ‘Triangle Of Sadness’

At Cannes 75, Screen International reviewed every single film in Official Selection*, Directors’ Fortnight and Critics’ Week. That’s 107 films, 11 days, and flickering images that don’t stop playing in your mind after the credits end.

(And, by the way, if we’re going to indulge in some auditing, let’s quickly clarify that the team which wrote them was 50/50 female/male, and the editing team 100 percent female.) We provide a reviews service to the industry, and we move quickly to its demands: what we get as a result is an immediate, complete overview of the 2022 Cannes Film Festival. There is, as always, a lot to unpack. But here are five immediate takeaways.

This was the first full Cannes since 2019. Even with Asian delegates staying away, huge numbers attended the festival and market. The theatrical marketplace for independent film has been crushed by the pincer movement of the pandemic and streaming since the last ‘proper’ Cannes, and hopes and dreams were pinned on the festival to revive cinema itself – ‘le grand cinema’, in the French sense, the communion of audience and image. Then the ticketing system went into meltdown and nobody could get seats. People cried. It was baking hot. Could 21 films ever hope to satisfy such expectations? They’re films, after all – not tablets from Mount Sinai.

The first film to screen at the festival was Jean Eustache’s 1973 The Mother And The Whore, an extraordinarily prescient work of cinema and a masterpiece which won the festival’s Grand Prix that year. Would it be churlish to remind Le Figaro critics that their paper called it an ‘insult to the nation’ back then? Either way, it set the bar impossibly high. Members of the Fourth Estate, themselves out of kilter from two years of reviewing Netflix and Amazon titles, proceeded to not agree on any film, except, perhaps, the highly accomplished but drawn-out and decidedly airless noir from Park Chan-wook, Decision To Leave. Distributors who pre-bought the title may have taken comfort from the raves, while knowing they’ll face an uphill battle with paying audiences when the time comes. These worries won’t trouble anyone who invested in the Palme d’Or winner Triangle Of Sadness, set to be the year’s arthouse blockbuster. It’s true the seams on this tryptych show, and, yes, it’s too long, but the gleefully positive points of this entertaining film were somehow missed by many observers. Still, though, some of the same legacy media will re-review the film on its commercial release: look for opinions to soften, although there was a sense at Cannes that an ageing bloc of critics are becoming too divergent from the audiences they also serve.

3. Cannes is twisting in its sections.

Part of the problem is that this year’s Cannes Competition failed to give reviewers the excitement they crave. (If you spent all day in a darkened room, you’d also probably like to see something less safe than Cannes 75. Of course, many forgot that the industry which produced them was going through an unprecedentedly difficult, risk-averse time.) Competition has a problem: it’s an artery blockage for world cinema. If the festival selection committee continues to repeatedly accommodate the elder statesmen of cinema and previous Palme winners in the line-up, there’s precious little space left for anyone else. A ‘return to form’ for the Dardenne Brothers, say, with Tori And Lokita, or David Cronenberg with Crimes Of The Future, even classic Hirokazu Kore-eda with Broker or Cristian Mungiu with RMN, is essentially cinema that is known. The festival’s Premiere section was supposed to house top-ticket ‘couture’ films like these, but it has already turned into an unfocused meander around Olivier Assayas revisiting Irma Vep in TV format alongside hard-hitting crime dramas from Dominik Moll and Rodrigo Soroyen.

While there were some very special debuts in Competition, particularly from Lukas Dhont with Close and Ali Abbasi with Holy Spider, there weren’t enough rebel yells in here, with the splashy ’Ship of Fools’ exception, perhaps, of the Palme D’Or winner.

Meanwhile, Un Certain Regard went from strength to strength, refinding its focus with first- and second-time directors to become the most exponentially rewarding section of the festival with titles including Burning Days, Return To Seoul, Corsage, Godland, Joyland, The Stranger, Rodeo, War Pony and The Blue Caftan, all set to thrive in festivals and select arthouse play for the next year before featuring in awards campaigns. This high-quality line-up did have a knock-on effect down the road at Directors’ Fortnight, though, still struggling with its identity – something which wasn’t helped by the perplexing decision to open with Scarlet, a dour, period, rural, semi-musical hodge-podge. Here, Mia Hansen Love’s One Fine Morning was one of the stunners of the festival and should, quite frankly, have played in Competition. Critics’ Week, as usual, marched to its own beat and polished its own jewels, especially the Scottish debut from Charlotte Wells, Aftersun.

This year’s Cannes jury, let by Vincent Lindon, may have mistaken prizes for confetti – someone really has to sort out the ex-aqueo problem – but they were the right jury for the right year. In 2021, the Palme D’Or went to Titane, a victory for female filmmaking and challenging cinema, perhaps, but not a success with the general public or, for that matter, the professionals who vote for awards, which, in turn, bring in audiences. Lindon’s team managed to award every film that stands a chance at the arthouse: Triangle Of Sadness, Close, Stars At Noon, Broker, Holy Spider, EO, The Eight Mountains, Decision To Leave, Boy From Heaven, Tori And Lokita – that’s a ratio of almost one prize for every two films. Triangle Of Sadness alone will bring audiences back, and, following on from the Berlin jury’s decision to award Carla Simon’s audience-pleasing Alcarras with the top prize, juries this year have performed their essential duty.

5. The business is the winner.

Nobody lost out at this year’s Cannes. There were no boos. Sales were robust on Competition and UCR titles, fuelled by newbies Mubi and A24 alongside veterans like SPC; other savvy buyers who can see a future for a lot of titles beyond the end of the festival were also out in force. A special Palme d’Or should go to the independent film business, robust yet flexible. Because, after all, for the industry to come back from the place it has been, and mount a Cannes like we’ve just seen – essentially, as if nothing had happened – is something quite remarkable, and, once those flickering images have settled, we will all certainly be grateful.