The importance of Nigerian film Half a Yellow Sun

BAFTA award-winning British film producer Andrea Calderwood (Last King of Scotland) reveals how the release of Nigerian love story Half a Yellow Sun has been postponed in the country. 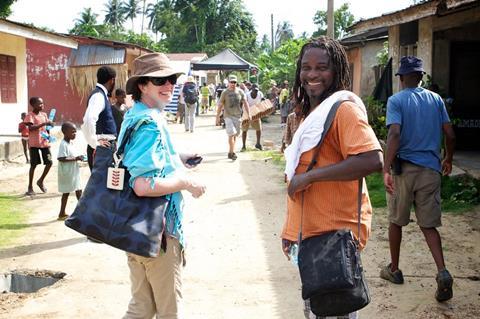 One of the things I learned when producing Half of a Yellow Sun in Nigeria are the number of uses for the word “challenge”. Nigerians describe everything from a minor setback to a major catastrophe as a challenge, and deal with all of these challenges with a resourcefulness and good humour, which continually impressed me as we were making the film.

There were so many obstacles to getting Half of a Yellow Sun made – from customs closures, to water shortages, to typhoid and malaria epidemics, to financing challenges (see, it’s catching) – that there were many times that the film could easily not have happened. What is hard to get across – and indeed some of the reviewers, judging the film from a much more complacent place, have missed – is just how groundbreaking Half of a Yellow Sun is.

There has never been a film made on this scale in Nigeria, and to make an epic love story, set against the backdrop of the Nigerian civil war, was hugely ambitious. It took the support and collaboration of the BFI and Lipsync in the UK with our intrepid Nigerian executive producers and investors, together with the extraordinary dedication of our cast and an extremely committed technical team who brought their skills from UK, New Zealand, South Africa and Nigeria, to see the film through.

Writer/director Biyi Bandele needed sheer determination and constant creative inventiveness to see his vision realized, and Chimamanda Ngozi Adichie, having trusted us with her novel, has never wavered in her support, and loves the film we made.

Most importantly, this is a story, which has never been told on screen, and it was for that reason that everyone went so far out of their comfort zones to help make the film happen. Chimamanda has talked very eloquently in a famous TED talk of the “dangers of the single story” and one of the things that is so significant about Half of a Yellow Sun is that it is a story about Nigerians, told by Nigerians, rather than the more usual outsiders’ view of Africa that is the way African stories are represented on film.

Which is what makes our final challenge even more ironic – the Nigerian public have not yet been able to see the film. Having been scheduled for release in Nigeria on April 25, after receiving a standing ovation in Toronto and being enthusiastically embraced by festival audiences around the world – the film has so far not been given its certificate by the Nigerian government censors, so the release has had to be postponed.

It is clearly a difficult time in Nigeria, with tragic deaths and abductions taking place – but the whole point of telling the story of Half of a Yellow Sun is to learn from the tragedies of the past, so as not to repeat them.

As well as telling a significant story, the film represents a real breakthrough in Nigerian film production – we used the Tinapa film studios for the first time, and having successfully produced this film, more productions on an international scale can follow.

The film is being released through a new distribution venture, and if the release through the proper channels continues to be delayed, piracy will simply take over.

We made Half of a Yellow Sun as an engaging, universal love story to be seen by a wide audience, and as discussions continue with the Nigerian authorities, I really hope that - as we have overcome all the other challenges in getting this story told - we can find a way for Nigerian audiences to see it in the way that others have all round the world.