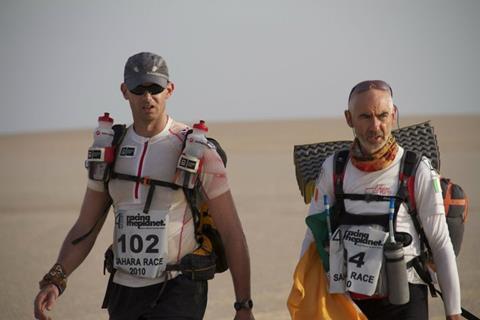 The power, intensity and drama of endurance eventing is impressively brought into focus in Jennifer Steinman’s documentary Desert Runners, which, while it may dwell on the spectacle of the event and the locations for a series of brutal races more importantly focuses on the simple truth that the runners simply do it for themselves…they may be battling a harsh environment, but the biggest battle is against themselves.

As might be expected, there are physical and emotional highs and lows, but the bonding experience of competing is evident as the films follows the sheer intensity of their quest.

The film looks at a year – in this case 2010 – in the 4 Deserts Ultramarathon series, considered one of the most difficult endurance challenges in the world as athletes (professional and amateur) race through four of the most grueling deserts on Earth – the Atacama desert in Chile; the Gobi Desert in China, the Sahara Desert in Egypt and Antarctica.

In 2009 Dean Karnazes (the executive producer of the film) became the first person to complete all four events in a year, and the film follows four amateur runners who aim to replicate his achievement.

They are ex-prod baseball player Ricky, now relocated from the US to London; law-student Samantha from Australia; British bodyguard Tremaine, and 56 year-old Irish businessman Dave.

Their battles – against the terrain as well as their own bodies and self-confidence – is at the heart of the film, all played out against a stunning series of backdrops. As might be expected, there are physical and emotional highs and lows, but the bonding experience of competing is evident as the films follows the sheer intensity of their quest, while also delving into the psychology of these driven individuals.

This is a not an issue-based film, or one that sets out to campaign, cajole of even  celebrate. Jennifer Steinman’s film simply and elegantly charts the four individuals throughout an Ultramarathon year. It brushes over things like cost (we never know how much each person has to stump up to take part), instead the camera flits between the straining faces and the stunning scenery. But then as one runner says: “We do it for ourselves – this is me against me.”