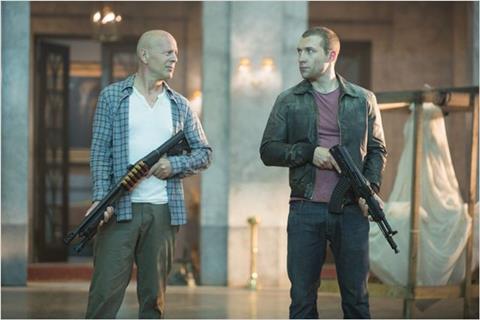 In spite of almost uniformly negative reviews, A Good Day to Die Hard has debuted top of the UK box office, unseating Wreck-It Ralph as the UK’s champion after just one week.

The latest instalment in the action franchise exploded into life with a $7m (£4.6m) opening, including previews, on par with that of the previous best in the series, Die Hard 4.0’s $7.7m (£5m). It’s worth noting that A Good Day to Die Hard achieved its debut from four days, compared to 4.0’s five-day opening in 2007.

Die Hard 4.0 is the series’ strongest UK performer at $21.5m (£13.9m) and with A Good Day to Die Hard’s much-talked about 12A certificate, the latest instalment could capitalise on the upcoming school half term to challenge 4.0’s series-topping haul.

Despite falling a spot to second, Disney’s Wreck-It Ralph still managed an excellent second weekend of around $5.3m (£3.4m).

The week’s highest new entry belonged to Universal’s This Is 40 in third.

Continuing its impressive run at the UK box office was another Universal release in the form of Les Misérables, which sung its way to an additional $1.7m (£1.1m) for a sterling $55.6m (£36m) to date.

Rounding off this week’s top five was Entertainment’s Beautiful Creatures, thanks to an estimated $1.7m (£1.1m) debut, including previews.. That marks director Richard LaGravenese’s best-ever UK debut, although it’s worth nothing that P.S. I Love You (LaGravenese’s strongest UK performer at $16.5m/£10.6m) had two weeks of limited release before expanding in its third weekend.

Enjoying a respectable hold in its second weekend was StudioCanal’s I Give It A Year, which laughed its way to $1.6m (£1m) for $5.8m (£3.7m) after ten days in play. Were it based on solely Fri-Sun figures, I Give It A Year would find itself in fourth place.

This week sees saturation releases for Warner Bros’ Cloud Atlas, Universal’s Mama and eOne’s Song for Marion. StudioCanal’s To The Wonder receives a wide release, while Dartmouth Film’s Fire in the Blood and Artificial Eye’s Lore are among the films receiving a limited release.