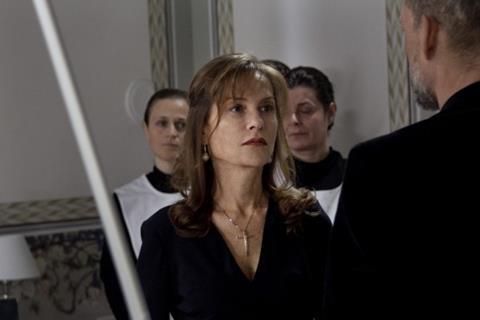 Marco Bellocchio’s follow-up to his Cannes-tickling Mussolini biopic Vincere is a multilinear drama set against the backdrop of Italy’s most famous right-to-die case, which culminated in February 2009 with the legally approved death of Eluana Englaro, a woman who had been in a vegetative state for 17 years following a road accident. But despite some moments of quirky brilliance and strong performances from Toni Servillo and Alba Rohrwacher, the heart of a TV melodrama beats beneath Dormant Beauty’s pale arthouse skin.

Bellocchio is a confident stylist, and his mise en scene here brings out the sombre mood of the underlying theme.

The continuing resonance of what was a long-running national news story will combine with the festival buzz and Bellocchio’s high reputation among Italian cineastes to give the director’s latest a healthy launch when it rolls out on home ground the day after its Venice competition screening.

Elsewhere, however, Dormant Beauty (Bella addormentata) will be a tougher sale than Vincere, as despite parallels to euthanasia cases in other countries (like that of Terri Schiavo in the States), Dormant Beauty doesn’t do enough to stand out from the crowd of vaguely auterish Euro-dramas. Though the presence of Isabelle Huppert in one of the film’s main roles could make a small difference in French-speaking territories.

If the story featuring Toni Servillo as a centre-right senator and Alba Rohrwacher as his fervently Catholic daughter is the strongest of the film’s three plot strands, it has more to do with the way that the two actors find depths in their roles than it does with the script, which despite some quirky digressions throws up few surprises in the development and resolution of the father-daughter conflict.

This plotline also generates one of those kooky, grimly satirical digressions that Bellocchio specialises in, as a clique of senators from Silvio Berlusconi’s Forza Italia party soak in a hot tub in an Ancient Rome style spa as they prepare for a vote which would give parliament the right to overrule sentences allowing for life support machines to be switched off. Veteran actor Roberto Herlitzka’s darkly comic turn as a lugubrious party shrink and prescriber of anti-depressives is easily the film’s standout moment.

Elsewhere, in a stiflingly conformist upper-middle class apartment, a young girl in a coma, who breathes only with the help of a life-support machine, is tended to by a bevvy of nuns and her scarily Catholic mother (Huppert), an ex-actress who has put her career on hold and sidelined her husband and son to care and pray for her daughter. A third storyline involving an overworked, ethically-challenged doctor (played by the director’s brother, Pier Giorgio) who takes a suicidal, too-pretty-to-be-true drug addict patient (Sansa) under his wing, is the least convincing of the film’s three intertwined strands– though here too there’s no faulting the performances.

Bellocchio is a confident stylist, and his mise en scene here brings out the sombre mood of the underlying theme – for example by keeping keylights off faces and using only available light even in certain night scenes. Carlo Crivelli’s ultra-classical orchestral soundtrack, leavened at times by a breathy jazz theme for counterpoint, is a worthy accompaniment.