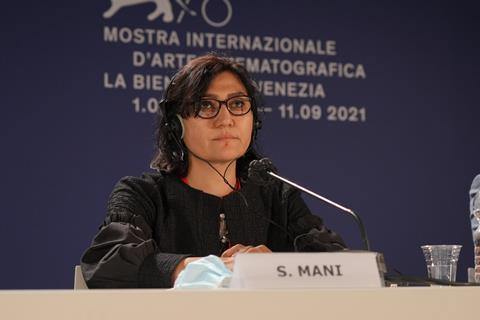 But instead of the hopeful ending she was planning, the Taliban’s swift and violent return to power has forced her to reconsider the film’s final act.

Mani presented the project as part of Venice Production Bridge’s Venice Gap-Financing Market, which ran run September 3-5.  She held talks with a number of potential co-production and sales partners.

The project needs around €150,000 to complete post-production, she says.

The filmmaker is lead producing under the banner of her formerly Kabul-based company Afghanistan Doc House, Farid Rezkalla at 24image in France and  Stefano Centini at Volosfilms base in Taiwan on board as coproducers.

Mani had begun work on the film in 2015, following two girls who challenge societal mores and risk their lives to study music at Afghanistan’s National Institute of Music in Kabul.

“The school was close to where I lived in Kabul,” she explains. ”It was kind of exceptional because boys and girls were studying together. In a city where every day you heard gunshots and the sound of violence, the melodies coming out of its compound were a huge contrast.

“I saw it as a type of utopia. It made me dream of an Afghanistan where guns would one day be replaced by instruments.”

Mani had been planning to end the documentary by showing how Afghan musicians were taking on teaching and managerial roles at the school, originally filled by international staff who helped get the institution off the ground. “I thought this would be the story of my film, the story of building the future of the country,” explains the filmmaker.

“I was hoping one of the girls at the school would end up becoming a teacher or holding a key position. That would have been a huge event. Living in Afghanistan was not easy, but we were all working so hard to build some hope for our future and the next generation.”

But Mani’s plans have been left in tatters following the sudden rise to power at the end of August of the Taliban, whose fighters have since occupied the school and destroyed the instruments.

“I went to the school a few days before the collapse and interviewed people about their plans and their thoughts on the Taliban. Nobody believed they would come back to power. They said, “It’s impossible’ and then right after the president [Ashraf Ghani] fled the country and left everyone behind.”

She plans to weave these events into the documentary and also hopes to track down some of the school’s former female pupils who like her have left Afghanistan.

“I’d like to interview them about their experiences and what impact this has had on them,” she says.

Like many Afghan cinema professionals and artists, Mani fled her country as the Taliban seized power and is now living in Europe.  ”Where I’m living isn’t the big question for me right now. My priority is rather to complete the budget and go to the editing room. I have a few editors in mind. At this point in my life, it doesn’t matter where they are, if they’re in Germany, I’ll go to Germany. If they’re in France, I’ll go there,” she explains.

”I am trying to finish it earlier. It’s important to talk about what’s happened and this situation before it’s too late and the world has moved on and forgotten.”

Kabul Melody is Mani’s second feature documentary after her 2019 work A Thousand Girls Like Me about a young woman who seeks justice having been sexually abused by her father for years. It screened at HotDocs, Sheffield, IDFA and won more than 25 awards worldwide.