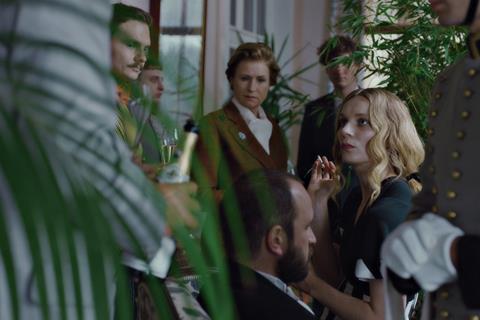 Dir. Samaher Alqadi
The public rape of a friend in Cairo’s Tahrir Square during Egypt’s post-revolutionary protests of 2013 was the starting point for this documentary exploring the fight for female emancipation in the Middle East. More than 50 women were assaulted that night. These attacks gave rise to a female protest movement that Alqadi set about capturing, while reflecting on her own suppression as a teenager in the West Bank. Karim El Hakim lead produces with France’s Serge Gordey, Germany’s Thomas Kaske, Norway’s Nefise Özkal Lorentzen and Jorgen Lorentzen, and Palestine’s Mohanad Yacoubi. Alqadi’s previous works include bio-doc Mohammed Bakri. Contact: Karim El Hakim

Dir. Andreas Fontana
The feature debut of Swiss writer/director Fontana centres on a private banker from Geneva who travels to Argentina during its military dictatorship to replace his partner, who has disappeared. The lead role is taken by Belgium’s Fabrizio Rongione, known for his performances in the Dardenne brothers’ films including Two Days, One Night and The Kid With A Bike. Producers are Switzerland’s Alina Film, France’s Local Films and Argentina’s Ruda Cine. Contact: Be For Films

Dirs. Jim Cummings, PJ McCabe
Los Angeles-based writer/director Cummings, winner of the 2018 SXSW grand jury prize for Thunder Road, teams up with actor/writer McCabe for this story of a married Hollywood agent who receives a mysterious invitation to an anonymous sexual encounter, opening up a world of lies, infidelity and digital data. Cummings, McCabe and Virginia Newcomb star in the feature, produced by Cummings’ Vanishing Angle, Different Productions and the UK’s Sons of Rigor Films. Contact: Vanishing Angle

Dir. Julian Radlmaier
German writer/director Radlmaier’s second feature centres on a penniless Soviet refugee in 1928 as he falls in love with an eccentric vampiress, played by Lilith Stangenberg (Nicolette Krebitz’s Wild), who is spending the summer at the seaside with her awkward servant. The script won the Golden Lola for best unfilmed screenplay during the 2019 Berlinale. Radlmaier’s 2017 feature debut, comedy Self-Criticism Of A Bourgeois Dog, screened at festivals including Rotterdam and Berlin. Bloodsuckers is produced by Kirill Krasovski of Berlin-based Faktura Film. Contact: Arri Media International

Dirs. Bardia Yadegari, Ehsan Mirhosseini
Farzad Pak, co-producer of last year’s Golden Bear winner There Is No Evil by Mohammad Rasoulof, returns with the feature directing debut of Iran’s Yadegari and Mirhosseini. Yadegari also stars in this story of a junkie poet who attempts to finish his latest prose while the city of Tehran falls prey to pollution and a lethal virus. It is not the first Berlinale experience for Mirhosseini, who appeared in There Is No Evil. Producers are Filminiran and Pak’s Hamburg-based PakFilm. Contact: Quentin Worthington, MPM Premium

The Girl And The Spider (Switz)

Dirs. Ramon Zürcher, Silvan Zürcher
Swiss filmmaker Ramon Zürcher has teamed with his twin brother to write and direct this drama, about a woman and her friends who endure a rollercoaster of emotions when one decides to move out of their flatshare. It marks Ramon’s second feature after The Strange Little Cat, which was selected for Forum in 2013, on which Silvan was producer and assistant director. The Girl And The Spider is billed as the second in a trilogy about human togetherness, and is produced by Geneva-based Beauvoir Films. Contact: Cercamon

Dir. Jacqueline Lentzou
The debut feature of Athens-born Lentzou stars rising Greek actress Sofia Kokkali (Thread, Little England) as a woman who returns home after a number of years to care for her sick father. When she discovers his long-held secret love story, it gives their father-daughter relationship a fresh start. Lentzou competed at the Berlinale in 2017 with short film Hiwa and won best short with Hector Malot: The Last Day Of The Year(which also featured Kokkali) in Critics’ Week at Cannes in 2018. Greece’s Blonde SA produces with France’s Luxbox. Contact: Luxbox

Dir. Fern Silva
US artist Silva makes his feature directing debut with this experimental film. Plot specifics are scanty but it is described as an essay film exploring the bonds between mankind, the cosmos, the elements and natural phenomena — including Hawaiian volcano Mauna Kea, where astronomers plan to build the world’s largest telescope. The film is backed by the Jerome Foundation, Radcliffe Institute for Advanced Study, the Film Study Center at Harvard University, MacDowell Artist Residency, Kodak and Mono No Aware in Brooklyn.  Contact: Fern Silva

The Scary Of Sixty-First (US)

Dir. Dasha Nekrasova
Belarus-US actor Nekrasova makes her feature directing debut with this horror mystery about two flatmates who move into an uptown New York duplex at a rock-bottom price. Their lives tumble into a psychosexual nightmare when a stranger informs them the place once belonged to the late sex offender and disgraced financier Jeffrey Epstein. Nekrasova appears in the cast alongside leads Betsey Brown and Madeline Quinn. Production took place in Manhattan in early 2020. Contact: Mikey Schwartz-Wright, UTA Independent Film Group

Dir. Le Bao
This debut feature follows a Nigerian footballer in Vietnam who joins four middle-aged women attempting to escape their mundane lives by running to an old house and creating a special world for themselves. The film was shot with non-professional actors and mostly by the river in the slums where the director grew up in Ho Chi Minh City. The project has received grants including from CNC, World Cinema Fund, Purin Pictures, TorinoFilmLab and Arte. Contact: Eva Diederix, Wild Bunch International

Dir. Alice Diop
French filmmaker Diop broke out with her 2016 documentary On Call, which travelled to festivals including IDFA, BFI London, Karlovy Vary and Cinéma du Réel. We explores the diversity of the French capital through a trip on its suburban trainline, crossing the greater Paris region from east to west. Athénaïse’s Sophie Salbot produces. Contact: Totem Films