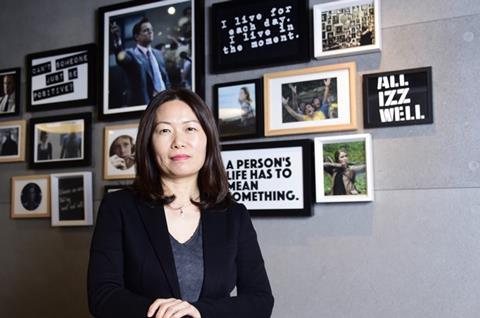 With growing demand for Chinese-language content for streaming services, Taiwan has evolved into something of a production hotspot in recent years. Easier on the regulatory front than mainland China, and much less costly, it became the go to location for streamers including Netflix, WarnerMedia and Fox (before it was absorbed into Disney) to develop high-quality Chinese-language series.

“When people started shouting about $300,000 per episode, we said no to that. You could see for a while that producers were able to sell their projects to Netflix, but then had difficulty selling their second projects to anyone, then their third project flopped. There’s no way you can make your money back on those kinds of budgets.”

But spending too little can also backfire, which is why Catchplay is taking its series production seriously, working with a government agency that taps into Taiwan’s National Development Fund. Earlier this year, it also brought on board former HBO Asia chief Jonathan Spink, who had steered HBO into local-language production in Southeast Asia, as principal advisor.

Catchplay is well known as a major film distributor, producer and investor in Taiwan, but is fairly new to high-end series production. Founded in 2007 by Timothy Chen and Cher Wang, chairman of consumer electronics firm HTC, the company acquires dozens of movies each year from US independents, European sales agents and Korean and Japanese studios, and also works with the US studios on streaming releases. The company has also co-produced Chinese-language films including Paradise In Service and 20 Once Again and invested in US films such as Assassin’s Creed, The Revenant and Martin Scorsese’s Silence.

Yang, a former Taiwan Mobile executive, joined Catchplay in 2012 and spearheaded its push into digital content. In 2016, the company launched its Catchplay+ streaming service in Taiwan and soon after expanded to Singapore and Indonesia. It has a long-term deal with leading Indonesian telco Telkom and its pay-TV subsidiary IndiHome, which has the Catchplay+ app preinstalled on its set-top boxes. In Taiwan, Catchplay is partnered with WarnerMedia to offer HBO Go as part of its premium SVOD package.

When Catchplay+ launched five years ago, premium movie content was still regarded as the most effective way to appeal to a white collar demographic with an SVOD and TVOD service. It was only when Yang saw The World Between Us, a ten-part drama about the aftermath of a mass shooting, produced by Taiwanese public broadcaster PTS, that she realised the potential of episodic content. She promptly acquired international rights to the series, which went on to win a slew of awards and is distributed by HBO in some territories.

“Series can generate crazy watching minutes, because when people are hooked they’ve got to finish it. So we do like the stickiness of series and that’s why we set up Screenworks Asia,” Yang explains. “We’re aiming to produce 100 hours of content annually, which is roughly eight to 10 projects every year, and hope to reach that sort of scale in two to three years. We’ve already released 35 hours this year, which isn’t bad as the team was only established last year.”

Series released so far include crime drama Trinity Of Shadows, co-produced with HBO Asia and Hong Kong broadcaster ViuTV; and the second season of The Making Of An Ordinary Woman, about a single woman pondering her life choices on the brink of her forties, which was co-produced with Taiwanese broadcaster CTS.

Upcoming projects include anthology Twisted Strings, a co-production with HBO Asia, Taiwan’s Bossdom and Singapore’s MediaCorp, executive produced by Taiwanese auteur Hou Hsiao-hsien; and martial arts drama Chi: The Method Of Breathing, directed by Liu Yi and based on his award-winning short film. Screenworks Asia is also developing feature films and episodic content in other genres such as young adult drama and factual entertainment.

Catchplay’s strategy so far has been to partner with other streamers and broadcasters to increase budgets, reduce risk and produce shows with stronger international appeal. It typically co-premieres the shows it produces with HBO Asia and local broadcasters, going day-and-date on the broadcast, but holding back some of the VOD functions. It has also used its experiences in theatrical distribution to do marketing for the series.

“Partnerships help us to produce a story that is more universal than just what’s relevant to the local audience,” Yang explains. “And we always try to form the partnership very early on. In the case of Trinity Of Shadows, we talked to ViuTV and HBO way before production started, so everybody was comfortable with the story and believed it had something to offer our respective audiences. When MediaCorp from Singapore came on board Twisted Strings, they were able to provide a different perspective and bring some of their cast.”

Set in Taiwan and mostly filmed in Mandarin, Trinity Of Shadows involves characters from Hong Kong, sometimes speaking in Cantonese, as well as some dialogues in Taiwan’s local version of Chinese. While most productions that are aiming to travel usually stick to Mandarin, the most widely spoken form of Chinese, the reality is that many different versions of the language, not all mutually intelligible, are spoken in different countries. Fortunately, Chinese has only one written form, so subtitles can be read by all Chinese speakers, and English subs are also available for Catchplay’s shows.

The next steps for Catchplay and Screenworks Asia is to produce content in other languages – especially Bahasa Indonesian for its service in Indonesia’s fast-growing entertainment market – and to start licensing all of its content outside of the territories where it either operates as a streamer or has distribution partners. “We started last month at Series Mania and will start looking at festivals such as Busan, Tokyo and Berlin,” Yang says. “Of course it depends on the timing of when our series are completed.”

Yang is excited by the Indonesia market, despite fact that it has become insanely crowded in a short space of time, with all the global streamers piling in alongside strong local services such as Emtek Group’s Vidio: “It’s a huge market, a quarter of the size of China, but with fewer restrictions, and while it’s very crowded, there’s still room for everybody to grow. We’ve started from a strong foundation with our partnerships with all the telcos, and we’re now expanding to other operators like GoPay [Go-jek’s digital payment app]. We’ve set up a local entity there, pay local taxes and answer customer calls with local languages.”

Of course, Disney, Netflix and many other global streamers are also digging deeper into Chinese, Indonesian and other local-language production in Southeast Asia, but Yang believes that success is not limited to those with bottomless pockets: “We see a lot of opportunities for regional and local players like ourselves. When it comes to content, relevancy is key. It’s not how much money you spend, it’s about whether you can tell a story to the heart of the audience.”