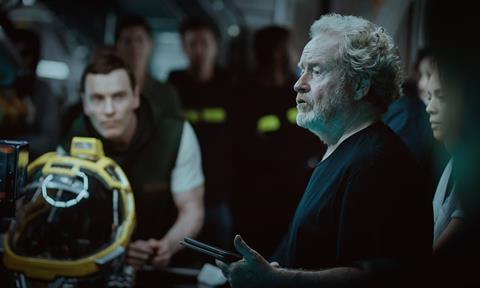 This year’s Consumer Electronics Show (CES) opened its doors to a record number of 165k attendees and 3800 exhibitors from January 5 - 8 in Las Vegas.

Here’s some of the key trends from this year’s show.

In light of estimations that AR will surpass virtual reality (VR) by becoming a $90bn market in 2020, this year CES gave added attention to the rise of the AR format or ‘mixed reality’.

Fox Innovation Lab presented new VR project Planet of the Apes (made in partnership with Andy Serkis’ Imaginarium Studios and to be released around the July 14 release of War for the Planet of the Apes), AR prototypes for an app that features the studio’s 2D entertainment and news content and Alien: Covenant which will be executive-produced by Ridley Scott’s RSA Films (see above).

The latter two were demonstrated via the much-talked about consumer smartglasses from Osterhout Design Group (to whom Fox is an investor). The glasses utilise both an HD camera and semi-transparent lenses, allowing users to view content while also seeing their existing surroundings.

Other AR/VR gadgets to gain attention included the HTC Vive-invested Lumus ‘everyday-wear’ glasses (below) and a glasses-free option from HoloLamp that creates a 3D illusion from a computer, video cameras and Unity gaming software. The result is reminiscent of a scene in Star Wars where Chewbacca and R2-D2 are playing a board game.

While VR had far less buzz than last year, there were plenty of discussions on how to move the market forward.

Sony Pictures Entertainment Senior Vice President Virtual Reality Jake Zim said in a panel that the studio is looking at how to make virtual reality more social by way of intellectual properties that are interactive in real time.

Twentieth Century Fox President of Product Strategy and Consumer Business Development Mike Dunn highlighted in another panel Fox Innovation Lab’s intentions on monetisation, using the example of their consumer release for The Martian VR Experience. Made available on HTC Vive and Sony PlayStation VR this past November, it was initially priced at $19.99, and later brought down to $9.99.

“We found the price point to be too high,” said Dunn. “This is still something we are trialling.”

IMAX also announced it is jumping into the VR mix by opening six centres that will screen VR experiences in pods for a small cost. The first opened last week in Los Angeles, the second is expected to be in London with a further two in Japan and China.

Brand partnerships were key at CES, including Nokia’s latest venture with Chinese video and streaming service Youku, which will use Nokia OZO VR systems to create and distribute 3D 360-degree VR content made available on the YouKu platform.

Honda also announced a partnership with DreamWorks Animation in producing a VR Honda Dream Drive experience that will provide in-vehicle entertainment, education and information that is synchronized with the motion of the vehicle in real-time.

As more people are watching cinema from their sofas, so grows the home entertainment product offerings.

Sony wowed with its A1E 4K HDR OLED televisions whose sound emanates from a pair of actuators mounted on the back of the screen, rather than speakers, to create the effect that images on screen are producing the audio.

Samsung showcased its new and improved Quantum Dot QLED televisions that provide a step-up in colour contrast, while LG revealed its wallpaper thin (2.57-mm) OLED screens that mount seamlessly to the wall.

On the audio side, Dolby Atmos was everywhere. The Sony HT-ST5000 and LG SJ9 soundbars gained attention for their ability to create 3D surround sound without a complex speaker set-up, while ‘Dolby Atmos for headphones’ garnered buzz as Windows 10 users can soon experience binaural sound through standard earphones (particularly useful for AR and VR projects).

While there may not be much 8K content at present, leading forecaster for the global display market Paul Gagnon said in a panel on Friday that hardware manufacturers are looking beyond 4K. This is particularly helpful for broadcasters who have yet to make the change-over. Gagnon continued that the images will be razor-sharp, with 32 megapixels per frame, compared to 4K’s 8 megapixels.

Already at this CES, Dell showcased its UltraSharp 32 inch Ultra HD 8K monitor (UP3218K) that is set to ship out this year (see below).

Connectivity was a word heard throughout the floor halls, with many executives grappling at how to downsize the number of cords, remotes, apps and platforms into a single offering.

Challenging Sling TV, PlayStation Vue and DirecTV - Hulu makes its foray into internet TV with a simple app that lets viewers personalise their favourite programmes and unique to the others, watch a selection of live TV including the newly launched short-form virtual reality music series On Stage.

Other prototypes on the demo floor included Samsung’s TV Plus, that will be available in Europe in 2017, and Haier televisions that will be compatible with Chromecast streaming app. YouTube are under wraps about their upcoming online television service.

Connectivity within smart homes and further personal spaces such as automotives is expected to reach $100bn in revenue by 2020. Mike George, Vice President of Amazon Alexa and Appstore, said in a panel last week that “the future homes will anticipate our needs.”

So what does this mean for entertainment? Dish Network announced during CES it is integrating its Hopper DVR platform with two Alexa-powered devices – the Amazon Echo and Echo Dot – which will let people navigate the television service using voice control. Dish expects to launch ‘Dish Hopper’ in the first half of 2017.

Robots are also set to enhance home viewing through the use of voice activation and artificial intelligence (AI).

LG’s Hub Robot is operated by Amazon Alexa, and similar to the Echo, can check the weather while playing music. The robot can also release mini robots that can be placed around the home to extend the range of the main controlling LG Hub Robot.

Panasonic brought projection into play with their robot proof-of-concept that resembles an egg (see above). When opened, it screens images pulled from online outlets such as YouTube. Its wi-fi capability, which accesses artificial intelligence-based natural language processing technology, enables the robot to communicate with human-like skills.