"I don't want my film to be used for political purposes": Russia's Yury Bykov on his TIFF title 'The Factory'

Yury Bykov, director of films including The Major and The Fool, screened factory drama The Factory in Contemporary World Cinema at Toronto Film Festival. He tells Screen about the state of play for filmmaking in Russia. 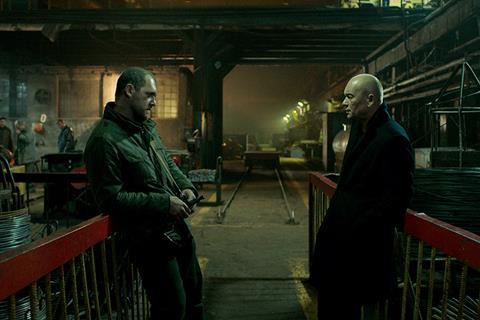 Russian director Yury Bykov was at TIFF this year to premiere his new drama The Factory, revolving around a group of workers who kidnap a local oligarch with the aim of securing a ransom after he announces the closure of the industrial plant that keeps them and their families alive.

The desperate operation takes a violent turn when the man’s elite private security team arrive to free their boss, a ruthless operator with shady political links.

The security goons have not reckoned on the determination of the workers’ ringleader, Greyhair, a war-damaged veteran and loner who wants social justice at any cost. A psychological and physical battle ensues from which no-one will emerge unscathed.

Bykov produced the feature through his company Coda alongside Eduard Iloyan at Russian production company Yellow, Black and White Films and Charles-Evrard Tchekhoff at Paris-based Kinovista, with the support of Invada Film in Russia and France’s Canal Plus and Wild Bunch, which is also handling international sales.

What was the inspiration for this story?

Many factories have been shut down in our country in recent times. I was born and grew up in the little industrial settlement of Novomichurinsk with a population of 30,000 people built around a single plant that hired the entire adult population of the town. I sympathise with the working people, and I have tried to imagine what could happen when simple workers are thrown out to the street with no means.

Like your past features, The Fool and The Major, the story pivots around one protagonist who is an outsider in the shape of Greyhair. What draws you to these sorts of flawed protagonists who challenge all sides?

Greyhair is a personification of absolute freedom that is impossible in our reality. it is incompatible with life. Because life is a compromise, it’s about adapting and adjusting, a conformist humiliating gesture. I’ve always been drawn to humans that place their dignity and convictions above survival. How will ordinary people and social mechanisms react to them? Will they let them accomplish their goals, or crush and destroy them? So far, we have to admit that the world is stronger than these people.

The film is extremely damning of the current system and corruption in Russia. Are you trying to put out a political message or is this just innately present in the drama and the reality of life in Russia today?

This film is not about corruption but about the conflict between the rich and the poor, and the hatred that divides them. This conflict is universal, and the examples are endless. Obviously, as any decent and involved person, I am worried about the fate of my motherland, and I’m not satisfied with many things happening there. But at the same time, as a citizen of my country, I don’t want my film to be used for any political purposes, especially in that long familiar opposition between the West and the Russian authorities that essentially boils down to a conflict of economic interests. It’s humiliating for any work of art. It’s important for me that my film is perceived as a story about people that I empathise with, not some sort of black political PR commissioned by any political force.

You announced last year that you were quitting directing after your TV spy thriller Sleepers was heavily criticised for its pro-Kremlin storyline. Are you sticking to that? Will The Factory be your last film?

I did actually announce my decision to leave the profession, but the audience responded with a mass urge not to do it and to continue to work. It’s already not the case that The Factory will be my last film, I’m already working on my next one. It’s a chamber drama about three people in one location in the middle of nowhere called The Guard.

You’re pro-Russian but not a supporter of the current government. How tenable is this position in today’s Russia and internationally as a filmmaker?

A pro-Russian, more specifically pro-people but not a pro-state position is deeply problematic because it doesn’t sit well with the authorities or with the opposition alike. Both demand utmost loyalty and display zero tolerance for the opposite camp. But I see glaring flaws in both. Both the state and the opposition are focused exclusively on their convictions and political ambition. They clearly don’t give a damn about ordinary people that are used as a target for manipulation and a tool of confrontation. To some extent, this is the message contained in The Factory. Slogans that are completely at odds with some basic compassion for the people, empathy towards their problems, however illiterate and uncultivated these people might be, are completely worthless.

When you see what has happened to directors like Kirill Serebrennikov and Ukraine’s Oleg Senstov, does it worry you?

The situations with Kirill Serebrennikov and Oleg Sentsov are slightly different, I wouldn’t merge them under one notion. Despite being openly liberal and progressive in his views, Kirill Serebrennikov enjoyed the support of high-ranking officials, received financing from the state. I don’t know what actually happened but it looks like that at a certain point Kirill crossed the line in his actions and statements. The regime interpreted it as ingratitude and disrespect in return for material and administrative support and set out to prove to everyone that you can’t rely on state resources and criticise it at the same time.

Oleg Sentsov is a devotee who defied an entire country, someone who is sacrificing his life for the sake of his convictions at this very moment. I don’t know the details of his case but what he did was probably to protect the country the citizen of which he considers himself to be. I cannot judge or criticise him, all I can do is acknowledge his courage.