Jessica Chastain reveals why her role as a Washington DC lobbyist in Miss Sloane is representative of a renaissance for realistic female characters on film. 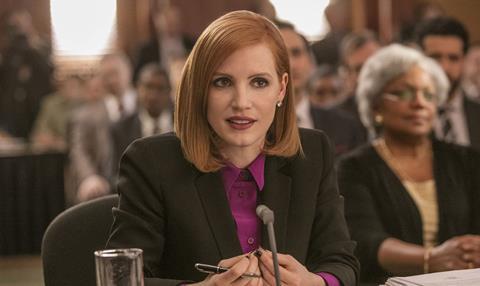 To research the role of Elizabeth Sloane, the fearsome Washington lobbyist at the dark heart of political thriller Miss Sloane, Jessica Chastain made a critical discovery that speaks volumes about the male-dominated US political climate.

The two-time Oscar nominee had been talking to a number of female lobbyists across the political spectrum when she first heard it. “One woman really left me speechless when she said Washington was a contact sport,” says Chastain, tucked away in an airport lounge after wrapping the independent drama Woman Walks Ahead. “I didn’t quite understand what she meant and then I realised she meant you have to cosy up to congressmen and senators, who are primarily men, and she was basically saying men were very touchy with her. She definitely wasn’t OK with that, but it was a fact of life for her.”

The bruising milieu of lobbying provides the backdrop to the latest drama from John Madden, for whom Chastain enjoyed shooting The Debt. Yet at its core there is something more intimate and timely, given the diversity debate tearing through Hollywood and the US as a whole.

“Yes, the film is about ambition and it’s a political thriller set in the American political system, but for me it’s a tale of this woman and addiction,” says Chastain. “And for this woman, her addiction is winning and this is a noble cause she takes on - but is it because she’s noble or because it’s the unwinnable case? I was really intrigued by that.”

Without giving away too much about a film that contains plenty of reveals, Sloane’s reputation as the best lobbyist in the business brings her into the fold of a boutique firm that has taken on the gun lobby. She accepts the challenge.

“It was very clear at the beginning of the movie that Elizabeth is a conservative lobbyist,” says Chastain. “I believe she’s Republican, she’s fiscally conservative… She’s working on projects that are great for free enterprise and low on government interference but terrible for the environment. I can see the path where she’s come from and when this case comes up it’s the first time you see her question things.”

To prepare for the role, the actress immersed herself in an unfamiliar world. “I didn’t know anything about lobbying and I’m very much into doing research, so I started by reading Jack Abramoff’s book [Capitol Punishment: The Hard Truth About Washington Corruption From America’s Most Notorious Lobbyist], which I found incredibly helpful,” she says. “He wrote about the little shortcuts he’d make and the moral ambiguity of what he was doing and how he got lost in that world.”

Through the producers Chastain met female practitioners - who account for only around 10% of all lobbyists because “DC is for the most part a boys’ club” - and learned how they dressed, spoke and thought. She declines to reveal the names of those she met, adding: “I wanted the goods, the secret information, and I wanted to keep it as private as I could.”

That approach reflects the character. Sloane is solitary and inscrutable for the most part; her only life outside work takes the form of repeat encounters with a sympathetic male escort. Opacity was there in the script and Chastain relished the blanks.

“I filled in her whole backstory - where she came from, how she found herself in this position, why she has a problem with intimacy. Any addict has a problem with intimacy because they’re always lying. You’re always looking for the high and you pretend you’re not. For me it was a tale of a person that had this emptiness in them and fills the emptiness with highs. We’ve seen that story a lot but I hadn’t totally seen it in the world of American politics.”

Even in Sloane’s personal life, Chastain charges up the character with unapologetic power. “You see her away from work trying to fit into society but everything is something she can use and she doesn’t really have to give any of herself to [that]; you see that for sure in her personal life. It’s a transaction and she’s in control. You see that all the time with men and it’s interesting to see that with a woman.”

The ambiguities of Sloane and the challenge she presented to an actor were apparent once Chastain read the script for the project, which EuropaCorp fully funded and produced with FilmNation, and will release in the US in November; eOne takes it to the UK in spring 2017.

“I really loved the character and didn’t have any reservations about playing the character at all,” she says, adding, “I’m always looking for female characters to play that are complex and messy and flawed because that’s what male characters are and everyone is that way. There are no heroes and villains - we’re all kind of shades in between and I was drawn to her because of that.”

The ability to play someone who does not bow to gender archetypes marks another stand-out role in a career that has earned Oscar nods for Zero Dark Thirty and The Help. The performance also takes its place alongside a host of exceptional work by women this season.

“It’s so exciting to me,” says Chastain. “A few years ago, every best picture nomination was [dominated by] male protagonists, male stories. In the year I got nominated for Zero Dark Thirty, I was talking to other women in the category about why don’t we have more stories where the woman is the protagonist and she’s not there supporting the male character. She can be the lead on her own.”

There is still a way to go, but Chastain remains optimistic. “We’re starting to go in a direction where a female lead in a film doesn’t have to be there as a prop or something to further the male story; there can actually be a movie about a woman and we’re seeing that a lot this year.”