French writer Colette was a prototype modern celebrity who tantalised the world with her unconventional lifestyle. Keira Knightley tells Screen what drew her to this free spirit. 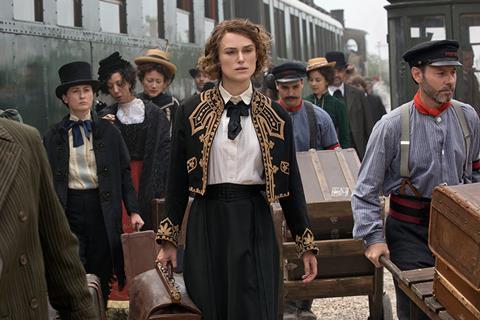 When United Agents’ Lindy King sent Keira Knightley the screenplay to Wash Westmoreland and Richard Glatzer’s Colette, recalls the actress, “She said, ‘Ooh, I think you’re going to like this.’” Knightley’s long-time agent knew her client only too well. “And then I read it,” she says, “and I went, ‘Ooh, I really like this.’”

Westmoreland and Glatzer had long laboured to make their film about French writer Sidonie-Gabrielle Colette, whose four Claudine novels became literary sensations when published at the start of the 20th century under the name of ‘Willy’, the nom-de-plume of her author and publisher husband Henry Gauthier-Villars.

It was the success of the filmmaking pair’s Still Alice, and especially the best actress Oscar win for star Julianne Moore, that finally gave the long-in-development project the necessary traction. Glatzer died in March 2015 of complications from amyotrophic lateral sclerosis (ALS), leaving his creative and life partner Westmoreland to carry the flame for the project — ultimately also calling in the screenwriting services of Rebecca Lenkiewicz (Ida, Disobedience).

“I just loved her,” comments Knightley on her desire to portray the character on screen. “I loved her strength, her bravery and the fact that the world didn’t quite fit her so she ripped it apart and made it fit her. I found her incredibly empowering.”

The script follows Colette as a young country girl who marries a Paris sophisticate, is exploited by him even as they emerge as a prototype for the modern celebrity couple, enjoys affairs with partners of her own gender, and finally fights for authorship rights to her works. “What I loved about it is that it’s talking about gender politics, sexual politics, female empowerment and yet it’s so fun. [Her husband] Willy is a shit but you totally understand why they’re together. They’re magnetic. When they’re on their game, you think, ‘I wanna be with them.’”

The smooth development of Colette once Knightley had attached herself to the project hit a glitch in summer 2016 when, with the film edging towards production and Westmoreland already relocated from Los Angeles to London, the actress begged for a delay. Her daughter Edie, then aged one, was playing havoc with the actress’s sleep pattern, and the intense role was just too daunting.

“The thing about playing a lead, you really are there all the fucking time,” she says. “It’s a wonderful, privileged thing but it’s very tiring. And if you’re doing that with a very small child who is waking up five times a night, literally keeping the words in your head is very difficult. I just thought, ‘Realistically, I physically can’t do this right now.’”

The shoot was bumped to summer 2017, principally in Hungary, where Knightley decamped with husband (Klaxons musician James Righton), baby and nanny — with occasional support from other family members.

Colette is produced by Number 9’s Elizabeth Karlsen and Stephen Woolley with Christine Vachon and Pamela Koffler for Killer Films, and Gary Michael Walters and Michel Litvak for Bold Films. The film premiered at Sundance in January, where it was warmly received, especially for Knightley and co-star Dominic West’s performances, and where the film was sold to Bleecker Street for the US and Lionsgate for the UK.

The distributors saw the potential for an awards push, with Bleecker Street releasing in late September off the back of a Toronto International Film Festival slot (grossing $5m to date), and Lionsgate setting the title for January 2019. In France, where reception for an English-language telling of this story is difficult to call, Mars will likewise release in January.

Knightley calculates she has done six films and plays since Edie was born three-and-a-half years ago. “The reason I’ve worked so much in this period is because I do understand that it’s going to be more difficult when she’s at school,” says the actress. “Suddenly, the periods of time when I’m going to be working are going to be very much around those school holidays.”

As a bankable name, Knightley has long enjoyed the luxury of being able to pick and choose roles, but she agrees that motherhood has made her even more determined to use her time judiciously. “That has always been there, wanting to have maximum agency in roles,” she nods. “But maybe it is a little more now. I think as you grow into yourself, your voice becomes stronger. I think that’s natural.”

Having made her name globally with the Pirates Of The Caribbean franchise, Knightley has since gravitated towards prestige fare such as The Imitation Game and Colette. Her recent role as the Sugar Plum Fairy in Disney’s The Nutcracker And The Four Realms is more the exception than the norm. “I’m very bad at keeping a balance there,” she laughs. “I know there’s this whole ‘two for them and one for you’… I haven’t kept to that at all. It’s been another one for me, and another one. A lot of the stuff I’ve done has at least made its money back, and I’ve always thought, if I’m interested in something, I can’t be the only one. I’ve let that guide me. I don’t have very niche taste. I like good solid drama that you can really get your teeth into.”

Over the course of Knightley’s two-decade film career, many of those dramas have been period roles, including Pride & Prejudice, Atonement, The Duchess, Anna Karenina and now Colette. “For whatever reason, they’ve always been the best parts that I’ve been offered,” she says. “I’ve been offered lots of roles in contemporary pieces as well, but they have never had that kind of juicy meatiness to them that the period pieces have had.

“I’ve always been interested in the extremity of that feminine image in period pieces, that extreme nature of the dresses that are so… other. And yet the characters inside them have always been trying to break out of that. I like the extreme image of femininity and the desperation to shatter it. Within period films, that can become very clear, whereas in modern films, because you’d be wearing jeans and a T-shirt, it’s less overt.”

It is also period films that have won Knightley attention from awards-giving bodies, beginning with Oscar and Golden Globe nominations for Pride & Prejudice in 2006. Like many, the actress has noticed the escalation of emphasis put on awards season over the years, and the demands of campaigning. “It’s just getting bigger,” she says. “Pride & Prejudice, it didn’t happen. You did about two or three Q&As. It’s completely changed, even more than when I last did it, which was The Imitation Game four years ago.”

On balance, though, Knightley sees the hoopla of awards season as necessary and helpful. “It’s difficult to get audiences so you need to shout and scream to go, ‘This one’s a good one!’,” she says. “‘We all think this is really good, so come and see it.’ You don’t make films for yourself, you make it for an audience, and you want it to get as large an audience as possible.”