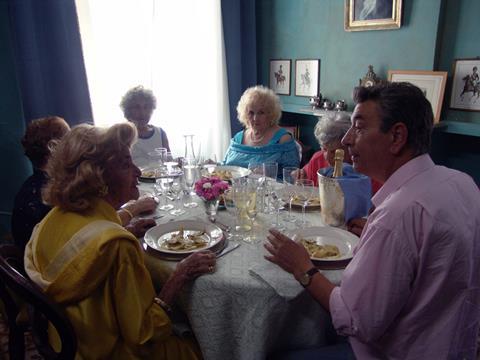 Small but utterly charming, Gianni di Gregorio's low-budget feature about an ageing Roman who suddenly finds himself looking after four ancient ladies over the mid-August dog days has enough heart to make up for its paper-thin story, and conceals a serious social message behind its delicate comic treatment of the burdens of old age, and the elderly as a burden. This won its 59-year-old director the Luigi De Laurentiis prize for Best First Film at Venice, where it caused a small commercial flurry.

Producedby Gomorrah director Matteo Garrone, this opened in Italy September 5 on limited release where it struck a chord with general audiences, notching up the weekend's highest screen average after Kung Fu Panda. There's something local about theemotionsit touches in a country that is increasingly unable to look after its old people within the family, but is haunted by the prospect of placing grandma in a home.

This is not, however, an exclusively Italian issue, boding well for its ability to cross over as a small arthouse hit thanks mainly to the memorable, semi-improvised performances by four non-professional actresses who make up the supporting cast. Sales have been good.

Gianni (played by the director himself) is an immediately recognisable Roman character; outside the house, he's a relaxed habitue of old-style Trastevere wine bars; inside, he's very much under the thumb of his tyrannical elderly mother (Valeria De Franciscis), a high-born lady fallen on hard times.

Aware that he is deep in debt and in arrears with his payments to the building co-op, its administrator offers to cook the books in Gianni's favour if he minds his own elderly mother over the mid-August 'Ferragosto' holiday (when even the few able-bodied Italians still left in the city head en masse for the beach). But the wily administrator turns up with an ancient aunt into the bargain; and when Gianni's angina starts playing up, the doctor friend who examines him makes things worse by throwing his own mother into the mix, so he can work a late shift at the hospital.

So a gaggle of old ladies (the average age of the four actresses is 88) is left in a small apartment with a reluctant but long-suffering and well-bred host. The women bicker, throw sulks and make friends, while Gianni attempts to monitor their pill intake and pacify them with food.

The film is dominated by the rich, worn hues of Rome in full summer. And the soundtrack - a faintly Balkan folk-jazz soundtrack of shrill trumpets and accordions - hits the right bittersweet notes.