The CEO of Gamechanger Films talks about managing a new team from home, her two Zoom set-ups and why she picked up her sewing machine when the pandemic hit. 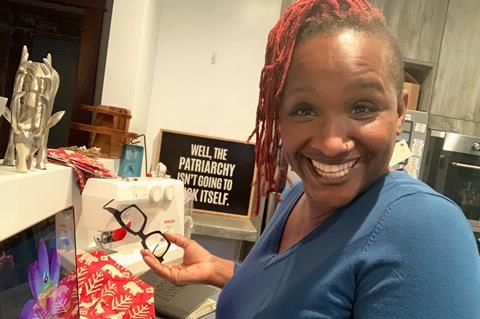 The independent producer of films including Dear White People and Real Women Have Curves and series including Lee Daniels’ Star became CEO and majority owner of the female-focused film fund Gamechanger Films in January.

She has extended Gamechanger’s remit to encompass projects by and about people of colour, LGBT+ people and people with disabilities. Brown and her new team of four were based in a WeWork space in Los Angeles when California’s shelter-at-home order was issued in March. Brown has been working from home ever since, where she lives with her dog Roxy.

How has your working life adapted to 2020?
My team and I are still getting to know each other so when we were allowed to have small gatherings I did my front deck so we could all meet outside, twice a week, in a socially distanced way. We got tested once a week [for Covid-19].

I have two places in my house where I work. When I’m trying to be fancy and cute and Zoom-ready, I’m in the room with the pretty colours. When I’m having regular meetings with people I know and love, I’m in my kitchen. I have my Zoom set-up but I also have my sewing kit. At the beginning of this pandemic I was very, very anxious so I busted out my sewing machine and sewed face masks. It helped me to relax and focus. I have joined a group called the Auntie Sewing Squad and we donate the masks to migrant workers and to homeless people.

What’s the first thing you do in your working day?
We have a 9am Zoom every morning on the days we don’t meet on my front deck. It’s good to lay eyes.

And do you have something in particular to mark the end of your working day?
You know, I haven’t and that’s a problem. When I say I live at work, it’s a problem. I have a therapist and she was like, “You have got to get out of your house and have a conversation with someone who is not work-related.” Hence why I went online and got my Covid-19 boyfriend! What’s so great about him is that I am never going to work with him because he’s a cisgender white guy! I told him, “You are going to have to like me for me.”

What do you miss about working in the office?
I miss hugging people. I need people. There’s a bit of depression that’s happening. I took a road trip up the Sonoma Coast with a friend and came back like a new person. I needed to be with another human being, away from Zoom, away from this, and with water and rocks and nature.

Guilt is a big one, too. On one side, this is the best I’ve ever been. I’ve got money in the bank, great projects, I’ve got financing. I’m a woman of colour who is writing cheques. I have that sort of guilt and sort of shame that everybody else is doing really poorly but I’m actually doing okay.

What is your favourite film festival?
I have a love for Sundance. That’s been the festival that has embraced me - and not embraced me. There’s been no greater hurt than when I had a movie and they didn’t let me in!

What was your favourite film growing up?
The Omega Man and Alien are my favourite movies. I remember watching Alien and thinking, “Wait, a woman can save herself?” And the black guy nearly got to live to the end. And with The Omega Man, it’s one of the first interracial relationships [between Charlton Heston and Rosalind Cash] on screen.

Of what are you most proud professionally?
It is what I am building with Gamechanger. And I’m not trying to plug it, I really mean that. To actually be able to like link arms with other people that I’ve come up with, who have had the same experiences as me, or lack thereof, but have the same integrity and that same foundation, it’s so fucking awesome to be able to work with them now. And to be like, ‘I can write the cheque for us. Let’s go make something’.

What’s the biggest professional mistake you have made?
I definitely came up hardcore with a chip on my shoulder. It’s complicated, because yes, I am a woman, and yes, I am a black woman. However, I now know I have to approach this inequality very differently.

What’s next?
We have three films that will shoot next year. I’m doing a Disney movie called Power And Grace [which is directed by Sara Zandieh]. We’ve also got a film with A24 called The Inspection, which takes place on a marine base [Elegance Bratton is directing]. And then we have A Vintage Crime that Leonardo Nam is producing with me and will also star in.

What do you think you would be if you weren’t a film producer?
I would own a crafting coffee shop. That’s probably going to be my endgame. I’m going to be somewhere in the Pacific Northwest - or Denmark or Finland.

Who would play you in the film of your life and who would direct?
Grace Jones to star and David Lynch to direct.