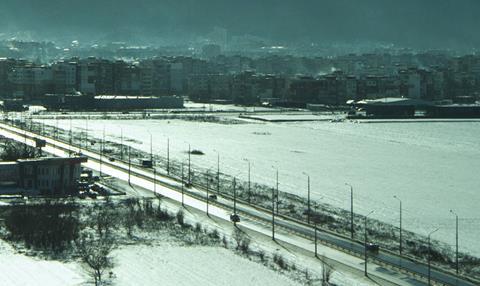 It was developed through the festival’s Work in Progress industry section last year, and won the Restart Award which provides post-production services. Screen sat down with Petrova to discuss her feature debut.

You present the brutality of Bulgarian society without any compromise.

I tried to be honest about it. When people ask me, ‘why do you present Bulgaria in such a bad light?’ I tell them to just take a one-afternoon excursion outside Sofia and they would see how it really is. Sofia isn’t representative of Bulgaria. There you can see the hipster crowd, people with iPhones, all these references that are very European and you think, it’s not very different. But just move out a bit from Sofia, and 40% of households live below the poverty line. This film speaks about them.

The main character’s actions and apparent traits are, however unethical or immoral, very human. She seems to have lost all hope and goals in her life.

The core idea was to tell a story about someone who is, in order to survive, forced to live her life constantly against her intuition for what is right. At what point do you become one of the living dead? At what point is death better than life? That’s why, every time she feels something, and her inner voice tries to tell her it’s the right thing to do, she takes morphine, to push it down and deal with that emotion. She doesn’t believe she can change anything, she just wants to survive.

To expand on it a little and explain why she is so reserved, almost Bresson-like, as a filmmaker and cinephile I tend to like more reserved characters. I like Haneke, Pablo Larrain, Amat Escalante, and I think there’s also a historical context of why I am like that. When you come from a place that’s lived through an oppressive regime, I think it’s inevitable that you become a person who has resilience. If you want to survive, you better be tough. And what do you do with all these emotions? You bottle them up. There’s no other way.

But she does develop a human connection, with Yoan, who teaches Orthodox Christian choir singing. It is also related to the religious component of the film.

Exactly. Whether you are a believer or not, this music has some kind of a cleansing effect on your mind and soul. That’s why Yoan says, “I’m a believer. Not in God, but in myself.” He used to be a prisoner and he knows that God won’t sort him out. For him, it’s music that helps, it’s a yearning for some kind of other-worldly truth, the truth of nature, or God, poetic truth. Music has a very direct connection to the human soul and we all feel that. It’s a strong part of the human experience and part of our DNA, and we understand it even without understanding the words. So music was his morphine.

I understand people need religion, it’s like a crutch. You go and light a candle and you think you contributed to something, and it’s a huge delusion but it makes you feel good. I think it’s important to be honest to yourself, and to keep fighting. If you stop the fight, then there is no hope. People tell me my film has no hope, and I tell them, I don’t want to give you the hope you get by lighting a candle. You are the hope, you have to create the hope yourself.

I think music, sex and art are close to being spiritual experiences. I really appreciate how Carlos Reygadas uses sex in his films. It’s not about sex, he uses it to talk about the spiritual experience, and this scene was all about that. It was a relief for the characters, and I completely identify and empathise with them. It really pains me, if sex is your only relief. This scene was always there, in all the drafts of the script. In a way, it is the closest thing to being a good person for these characters.

How did you decide on the visual style? There are a lot of handheld close-ups, and images out of focus.

A big part of our talk with the DoP [Krum Rodriguez] was the decision to use handheld cameras, but not like the Dardennes, always following the characters, but just being there, breathing, very meditative. It was also a way to subconsciously convey this kind of presence, of God, or whatever this otherworldly presence that is watching them is. I wanted it to be a bit eerie as well, as I like a certain kind of horror films.

There are a few spots when we pull the focus, or the image kind of bleeds into focus. This is the other side of this otherworldly presence. This is what we jokingly called a “Godlike” shot, and on the other side we had the character’s perspective, which is bleeding in and out of their position. It’s like being in a swamp, in this muddy, unstable place, a reality that you can’t escape from. That was also crucial for the choice of the colour palette, it’s all kind of grey, they all wear the same kind of coloured clothing, and the grey buildings, and the winter sky.

The actors are non-professionals, and Irena Ivanova is really amazing. How did you pick the cast?

It was very important to pick people who have experienced the emotion of the characters, or are close to that emotion. Irena is a poet, and if I was a poet, I would be like her. She writes from the same place of pain, she knows the suffering inside and she is very creative. She has an incredible imagination that she can tap into.

I was directing the old people through her. Most of them live in care centres for old people and they have nurses, and in their eyes she was just one of the many.

I didn’t give the actors the script. I’m very into a haiku kind of filmmaking, where with minimal tools I can create a maximum effect, to achieve an atomic meaning just by putting together two contrasting things. I want to go even more in that direction, even more minimal, and create tension in this way.

Do you have any plans for the future, more minimal projects?

I have two projects in mind. One is called Dust, it’s about a very rich woman in her sixties and her son who’s around 40. He is a drop-out from a PhD in Chinese philology in London, so it’s a typical upper-class guy who never worked in his life. He comes home to his mother in Bulgaria and she has just retired. She is a powerful figure in the society and she’s a hypochondriac, so she basically kidnaps her son through guilt-tripping him to take care of her. It’s about huge expectations in which we find no meaning.

The other story is about a bigger theme, gun politics. In Syria, every second Kalashnikov is made in Bulgaria; it’s about a worker in one of those weapons factories.