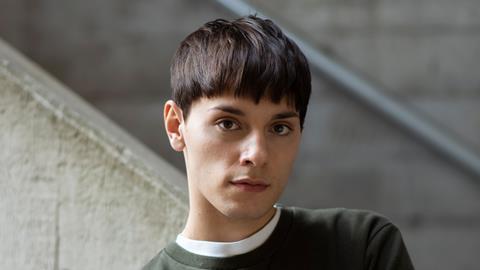 Max Harwood will soon be seen as the lead in Disney’s adaptation of hit stage musical Everybody’s Talking About Jamie, currently set for theatrical release in January 2021.

Harwood was studying musical theatre at Urdang Academy in London when he won the role, and it is his first film or TV credit (he previously appeared in a British Theatre Academy production of Spring Awakenings at Stockwell Playhouse in London).

Jamie is inspired by the true story of Jamie Campbell — a 16-year-old boy from a council estate who wants to be a drag queen — and is produced by Film4, Warp Films and New Regency, and directed by Jonathan Butterell. Harwood won the role of Jamie late in the casting process after a 12-month search involving 3,500 applicants. “I had never auditioned for a movie before or anything as large-scale as this,” he says. “I had to do a lot to prove myself for the role.”

If the casting process was long, the prep was rapid. After being offered the part in March 2019, filming started in June, in and around Sheffield. Harwood’s first day on set saw him shooting with Richard E Grant, who plays a former drag queen and Jamie’s mentor. “My initial thoughts were, ‘Oh my god, I’m on set with an Academy Award nominee on my first day of shooting, I feel sick,’” he recalls.

His other co-stars include Sharon Horgan and Sarah Lancashire, with the latter making a particular impression on the actor in the role of Jamie’s mother. “The more serious scenes with me and Sarah are so important in our film and I felt she really guided me through those and taught me so much,” he says.

Harwood took some time off after the intense Jamie shoot, and plans to complete his third year at Urdang Academy. Next up he is looking for a dramatic rather than a musical role, and says he is inspired by actors such as Imelda Staunton, who are able to cross over between both kinds of work. “I hope this job will enable me to do that,” he says.