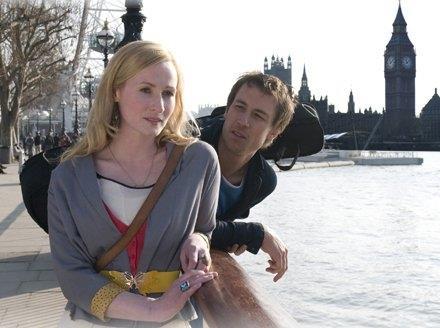 Forget Me Not is an engagingly low-key indie romance that makes great use of its London locations and does a good job in developing its would-be lovers. Beautifully shot and certainly watchable, it could easily appeal to festival as well as distributors wanting to mine the appeal of a weepie romance.

Moody and romantic music and a lot of nicely composed shots of London help give this indie affair a real sense of style.

It is a thoroughly professionally made affair that moves at just the right pace and is replete with the expected medical twist that most romantic dramas feel obliged to pencil in. Not necessarily a bad thing, just that the feeing of familiarity tends to linger.

Musician Will Fletcher (Tobias Menzies) helps barmaid Eve Fisher (Genevieve O’Reilly) deal with a drunk as she leaves work, and the two find themselves wandering through the London night as she heads to a party and he accompanies her.

The pair hang-out, win a bottle of champagne at an egg-and-spoon race at the party and start to fall for each other, but there are niggling issues that tinge their burgeoning romance as his medical condition becomes more apparent.

Very few key London location backdrops are left unused – Tower Bridge, Houses of Parliament, South Bank and a romantic interlude in one of the pods of the London Eye – as they weave their way around the capital. Both leads are well known TV faces – Menzies featured in Rome, while Irish actress O’Reilly was in Spooks and starred as Princess Diana in TV movie Diana: Last Days of a Princess (2007) - while Gemma Jones crops up for a brief cameo as her elderly mother.

Moody and romantic music and a lot of nicely composed shots of London help give this indie affair a real sense of style as this ‘will-they, won’t-they’ contemporary romance heads towards tearjerker territory.