'Furious 7' biggest film ever in China 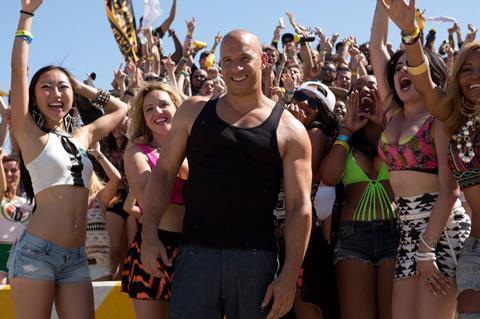 The action sequel has overtaken Transformers: Age Of Extinction with a cumulative gross of $324.31m in 15 days.

Directed by James Wan, Furious 7 grossed $72.7m from 11.5 million admissions in its second full week of release (April 20-26), according to EntGroup figures.

Transformers 4 grossed just over $320m in China when it was released in June 2014.

Li Yu’s youth romance Ever Since We Love came in third with $10.24m for a cumulative gross of $21.91m after 10 days, followed by DreamWorks Animation’s Home, which opened in fourth position with $8.02m in three days.

It was followed by two openers – QED International’s Sabotage, starring Arnold Schwarzenegger, which grossed $2.5m in three days and local romantic drama Silent Separation (aka You Are My Sunshine), which grossed $2.11m from advance ticket sales.

Scheduled for release on May 1, Silent Separation is directed by Huang Bin and Yang Wenjun and has a stellar cast headed by Huang Xiaoming, Tong Dawei, Mini Yang and Angelababy.