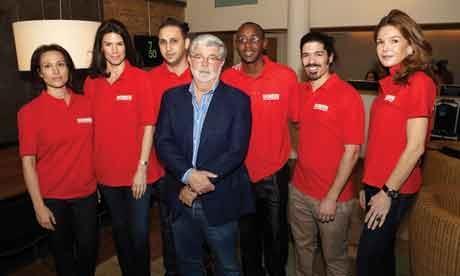 In an age when anyone can pick up a camera and make a low-budget feature, what advice would you give young film-makers?

You live in a wonderful time because the consortium of rich corporations that used to control this entire medium are now doomed. You can now make movies, buy your own “studio”, for $3,000. That’s a camera and editing equipment that gives you production, post-production, sound and special effects and it’s as high quality as anyone has. You also have, through the web, a distribution set-up no-one’s ever had before. But you’re also faced with the same problem as studios: how do I get people to see my films? Where there were 1,000 movies, now there’s going to be a million. There’s no answer other than to make really good movies.

It’s the same as I say to writers. There are not that many good writers out there. All you have to do is write a great screenplay and someone will find you. Same thing with movies - we are starting at the bottom now. Someone records a cat jumping off a roof and diving into a bucket and 50 million people watch it on YouTube. So we’re at the “cat in the bucket” stage, but we’re going to get to the point where short films are made online, then longer films, then features, helped by the web’s reach. We’re not quite there yet, but it’s a very exciting time.

You’re at the beginning of a new media revolution. You’re the beginning of the 21st century and I’m the 20th century. This is going to be very powerful change. In the end it’s going to come down to the best man wins, and it didn’t used to be that way. It was always very, very competitive but it was vaguely rigged by studios that made the decision about who the best man was and bet on that.

How do you rate your own success?

When you’re making movies you have a very different perspective. My success is based on what I attempted to do and what I succeeded in managing. No matter what you do, you never really reach your expectations. One film I produced came out much better than I believed it would - Raiders Of The Lost Ark - because I had Steven [Spielberg] directing it and he’s a genius.

My films where I write and direct and end up with a real concept of what I want - sometimes my reach isn’t quite up to my ambition. I always look at a film and say, “That didn’t turn out that well.” Star Wars was a film that I looked at and said that didn’t turn out as I wanted it to.

I’m happy with it now because I’ve been able to go back and put the scenes in I wanted and make the changes I wanted. Film is always about making the resources and time you have work for you. You never have enough time; you always have to face disaster. Movie-making is about overcoming disaster. It won’t ever be quite what you wanted.

The real world doesn’t co-operate. You don’t get quite the actor you wanted, or you get the set but it’s not quite what you wanted, or you have this beautiful palace, but you only have it for half an hour. So it’s really about how well you can do in the circumstances.

There is a border between film schools and getting into the film business and meeting established industry people that still seems to exist. How do young film-makers get though it?

That border has always been there. When I first started there was no way to get into the industry at all - zero. They never hired anyone from film schools; they never hired anyone from outside the family. In film school we all loved making movies and we just wanted to do that - and we just said, “Let’s keep making movies until someone stops us.” Then eventually we graduated. My first two movies, THX 1138 and American Graffiti, I had moved to San Francisco and people said, “You can’t make films there.” But we did. The only border is in your head.

In some ways we’re moving to a world without borders. We are seeing a paradigm change in how movies get made, how they get distributed, and the internet has pretty much wiped out those borders. Now you can get people around the world to see your film.

What does it take to be a young film-maker today?

But be persistent. It is going to be hard. Knock over any barrier that gets in your way, knock it down, chisel a hole in it, go around it - just don’t get beaten down by the system. We all have to face the barriers. You just have to keep pushing.

It’s the same thing with the first edited version of your movie. It is always terrible, always awful and you have to think, “I am going to have to fix this.” And the next day you go to work and you fix it and sometimes it turns out fantastic.

How important is it to have a sense of the commercial side of the business?

My business ability is pure common sense. I don’t know a lot of really sophisticated things, but I don’t really have to. I just know the common sense things that my father told me: don’t borrow money, don’t spend more than you make.

For Star Wars I started out with one movie, it turned into three - and I wanted to make sure they all got made. I was coming off two failed movies and I was concerned they [the studio] would get rights to my movies and not make them. Everything I’ve done is self-preservation, really. Just to ensure I didn’t get screwed by the system.

Omri Bezalel, 26, from Israel, has wanted to make films since he picked up his father’s home-video camera at the age of nine and shot an hour of material. After high school and a summer studying film directing at the University of Southern California, he enlisted in the Israeli military for five years. Since September last year he has been living in New York and studying at the New York Film Academy. He has written, produced, directed and edited eight short projects and crewed on more than 30 student films (and acted in four).

Pierre Kayitana was born as a Rwandan in exile in 1986, in the Democratic Republic of Congo (Zaire). His family returned home to Rwanda after the genocide. His first passion was the internet and he developed websites for many organisations in Rwanda. In 2005 he moved into film after training in documentary film-making at the Rwanda Cinema Centre. He has worked as a production assistant with director Roger Spottiswoode on Shake Hands With The Devil. For the last four years he has led operations for the Rwanda Film Festival.

Ismail Al Qaisi, 23, is a refugee from Beit Jibrin refugee camp in Bethlehem. When he was 14 years old, photography classes inspired him and led him to film directing. In 2007 he attended a TV and media course run by the Al Rowwad Centre in the Aida refugee camp. He directed and edited his first documentary, Strangers At Home, and in March 2008, he won a scholarship to a one-year practical film-making course at The Met Film School in London, where he wrote, produced and directed two films. He graduated with distinction in November 2009 and is beginning a BA in practical film-making at The Met.