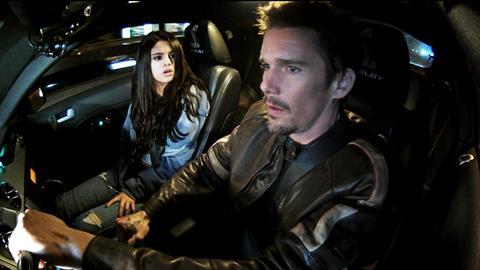 Getaway has but one task — deliver nonstop primo car chases — and it can’t even do that right. A failed attempt at being a grimy B-movie, this claustrophobic thriller commits the cardinal sin of being supremely ludicrous while having no sense of humour about its own preposterousness. Embodied by star Ethan Hawke’s one-note intensity, Getaway grinds along joylessly, its wall-to-wall chase sequences more tedious than they are transporting.

With a notable exception near the end of the film involving a bravura unbroken POV shot from the front of a car careening recklessly through traffic, Getaway’s car chases are numbing examples of endless motion and cacophony that add up to precious little.

Released by Warner Bros. in the US, Getaway will open during Labor Day weekend, a notoriously moribund time at the box office. Hawke’s presence in the sleeper summer hit The Purge may help some, and younger audiences may be tempted to give this movie a try because of co-star Selena Gomez. But as its generic title implies, Getaway doesn’t have enough of a marketing hook to stand out from the crowd.

Set in Sofia, Bulgaria, Getaway stars Hawke as Brent, a former race car driver who comes home one day to discover that his wife (Rebecca Budig) has been kidnapped. Brent quickly receives a call on his cell phone from the abductor (Jon Voight), who instructs him to steal a specific car out of a parking garage if he ever wants to see his beloved alive again. Reluctantly, Brent complies, driving around Sofia with the car’s hothead owner (Gomez) in tow and following this nameless man’s instructions.

Ideally, the film should offer mindless but high-octane jolts as Brent pilots his souped-up car through the city while being pursued by cops and trying to outwit this unseen kidnapper. But as directed by Courtney Solomon (An American Haunting), Getaway doesn’t so much build in tension as it repeats an irritating formula over the course of its short running time.

With a notable exception near the end of the film involving a bravura unbroken POV shot from the front of a car careening recklessly through traffic, Getaway’s car chases are numbing examples of endless motion and cacophony that add up to precious little. The film covers its bases early by mentioning that Brent’s stolen car is armoured, which is meant to justify why it can withstand the beating it takes, but Solomon doesn’t have the visual acumen to make these action sequences frenetic or balletic. In Getaway, if you’ve seen one car chase, you’ve seen them all, with even the novelty of the car sequences being done mostly without CGI or green screens only momentarily thrilling.

Such shortcomings could have been forgiven if the filmmakers adopted a more playful approach to the material. Whether it’s the shoddy explanation of why Gomez’s unnamed character gets involved or the villain’s absurd scheme to get Brent to do what he wants, Getaway can’t go far on subtlety or logic — it’s meant to be an unpretentious, unabashed movie-movie. But Solomon drapes the story in life-or-death anguish, Gomez’s and Hawke’s limp smart-ass banter the only sign of levity. By owning up to its silliness, Getaway could have been breezy fun. Tragically, everyone instead seems to be thinking they’re making something good.

Hawke always possesses a soulful weariness, a quality that’s stretched to the breaking point with this character, a man haunted by some dark (and utterly uninteresting) past failings. Meanwhile Voight, mostly a disembodied voice emanating from the car’s speakers, tries to suggest cool, sophisticated evil to little effect. And as for Gomez, whatever vague promise she showed as one of the blankly amoral gals in Spring Breakers is wiped away by this maddeningly shrill performance as the world’s most annoying backseat driver.

Unconvincingly, she plays a computer expert who helps Brent figure out the bad guy’s plan, which mostly requires her to punch a lot of buttons on her computer tablet and talk tech gibberish. Occasionally, she’ll also advise Brent what to do behind the wheel. Sometimes, it’s “Look out!” Other times, it’s “Look out! Look out!” That’s some range.