Gett, The Trial Of Viviane Amsalem 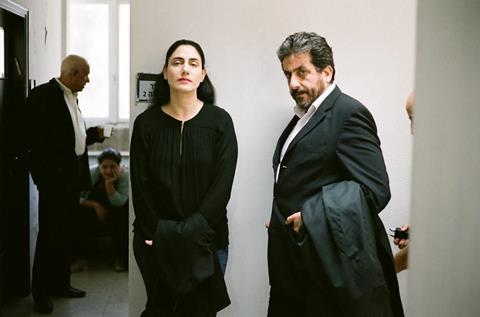 The third part of a trilogy started 10 years ago with To Take A Wife (2004) and followed by Shiva (2008), the new film of Ronit and Shlomi Elkabetz puts a resounding final touch to the ferocious portrait of a woman who is desperately fighting Jewish religious dictates to regain her freedom from an arranged marriage she never wanted in the first place.

The film is a long series of court deliberations spread over a period of five years, with postponements, delays, outbursts and crises that threaten several times to interrupt the procedure altogether.

Shot entirely in a bland, entirely bare rabbinical courtroom with only occasional exits into the reception next door, which looks even more naked and less adorned than the courtroom itself, deprived of any artifice, decoration, music or any other means of escape, the audience is forced to face the full impact of what looks like an outdated medieval procedure, but in fact is an authentic replica of the only kind of process available to Jewish Israeli women wishing to obtain their divorce.

Viviane (Ronit Elkabetz) had been given in marriage, as was the custom of the Moroccan Jews, to Elisha Amsalem (Simon Abkarian), an upstanding member of the community, respected by his neighbors, a pillar of the local synagogue. She bore him four children, she worked her fingers to the bones like him, she did her best to keep house and be a good wife, but the longer she lived by his side, the more difficult it was for her to support his whispered poisonous allegations, to watch him trying to turn her children against her or endure his implied criticism of her every act.

Unlike him, she fumed and raged, asking him time and again for a divorce that he would not grant under any conditions. And Jewish religious laws cannot force him to, as long as he provides for her and does not physically assault her or harm her in any way. When she is left with no other choice she leaves home and moves in with one of her brothers.

That all took place before the beginning of Gett, and snippets that will explain it are sneaked into the dialogue. The Rabbinical Court, where she tries to drag Elisha, is asked to intervene, but since they are supposed to defend the family institution at any cost, they suppose the woman is always at fault, demand that she abide by the man of the house and try go back again and again to live by his side, despite all her protests.

Witnesses are brought in to testify about the couple’s life together and their respective characters, the two advocates, Carmel (Menashe Noy) representing Viviane and Shimon (Sasson Gabbai) for Elisha, are both well versed in Rabbinical law and use the kind of terminology that sounds somewhere between ceremonial and ridiculous, the three Rabbis sitting in judgment may occasionally mellow for a moment or two, but ultimately, they would prefer to be left off the hook and let the couple deal with their problems without the court’s intervention. As for Elisha, when he finally turns up in court, his only answer is: “No, never, no divorce”.

The film is a long series of court deliberations spread over a period of five years, with postponements, delays, outbursts and crises that threaten several times to interrupt the procedure altogether. Tension is mounting with every new session, so does sheer fatigue, frustration and despair, the repartees are quick, tough, unpredictable, and unveil how deeply ingrained are all the prejudices against women, their rights, their capacity to fend for themselves and their inferiority to men. And at the end, when Viviane is finally released, the price she has to pay for it is steep enough to ruin the rest of her life.

The dialogue, blending anger, bitterness, fury and sarcasm, delivered by a cast that seems to have written them (which is not the case), so naturally do they flow back and forth between the various characters, who can’t seem to make a wrong move if they wanted to. The Elkabetz siblings are right on top of the action, they know exactly what they expect from each and every one of the performers and do not appear to settle for less.

All through the film there is no such thing as establishing shots or objective points of view, the camera instead always looking at characters through the eyes of those who address them, putting the viewer in the position of being right inside the courtroom with them. Maybe not a nice place to be, but a fascinating one.