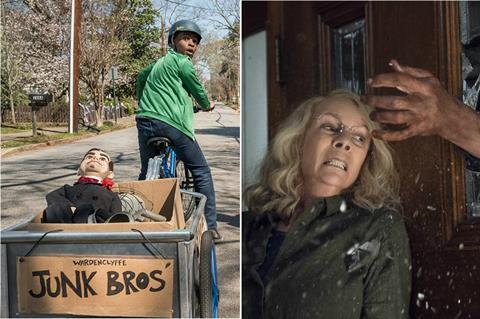 As Halloween draws near, the UK box office is set for an influx of spooky tales.

Sony Pictures is hoping Goosebumps 2: Haunted Halloween will attract those looking for a family-friendly scare. The previous feature adaptation of the book franchise – the Jack Black-starring Goosebumps – opened with £2.7m for Sony in 2016 and closed on £9m.

Black has a smaller role in the sequel and is not fronting the marketing campaigns this time out. Reviews have been middling, so repeating the numbers of its predecessors could be a tough ask. In the US, the film was released last weekend, opening with $15m – so a £1.5m bow in the UK would be considered a similar result.

On the more adult side of the spectrum is Universal’s Halloween reboot, in which Jamie Lee Curtis reprises a role she first played in 1978, this time for Blumhouse Productions and director David Gordon Green.

There have been a multitude of previous entries in the Halloween franchise released in the UK, the most successful of which is Halloween: H20 (1998) which took £3.3m. The latest film will be hoping to set a new benchmark.

An alternative pre-Halloween release this week Matteo Garrone’s Dogman – via Curzon Artificial Eye - not a horror film but certainly characterised by director Garrone signature dark and bleak eeriness. The Italian seaside town-set film was a hit in Cannes this year, where it picked up the best actor prize for star Marcello Fonte.

Also new on release this week is Michael Moore’s Fahrenheit 11/9, via Vertigo, the director’s latest politically-charged documentary. It looks at the 2016 United States presidential election and the subsequent presidency of Donald Trump.

Lionsgate will be putting out Hunter Killer, the latest Gerard Butler-fronted action film, in which an untested US submarine captain teams with US Navy Seals to rescue the Russian president.

Key holdovers include Warner Bros’ A Star Is Born, which shot to the top of the chart last week with a fantastic 0% drop on its first weekend, Sony’s Venom, Universal’s Johnny English Strikes Again and First Man, and Phoenix Productions’ Polish-language Clergy (Kier), which last week set a record by posting the highest-ever opening for a Polish film.