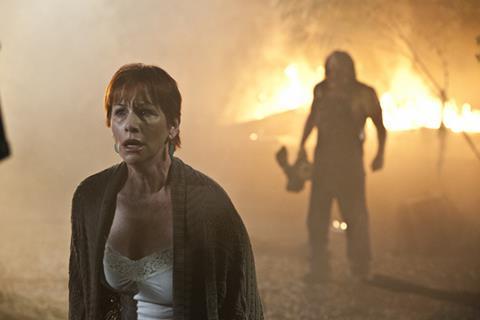 Given its title, it comes as no surprise that Hatchet III wears its gore credentials well and truly front-and-centre, revelling in its oddly – and bloodily - amusing opening shot of its heroine blasting the head of hulking murderous swamp creature Victor Crowley (Kane Hodder) with her shotgun and staggering off into the night.

As might be expected the killings come thick fast – cue dismemberings and shootings aplenty – and while it is all rather familiar it is at least smartly paced.

This engagingly snappy and gory B-movie sequel picks up where its predecessor left off, with blood covered heroine Marybeth (Daniele Harris) shooting off the face of the malevolent killer…but naturally she should know better, and no sooner is her back turned than he is up again and ready to attack her. Luckily there is a handy chainsaw to hand – this is a tongue-in-cheek cheesy horror flick of course – and soon she is busy slicing and dicing old Victor, and dragging his dripping scalp off to the local police station.

So far, so good, and we are only 10 minutes into Hatchet III, the brainchild franchise of Adam Green, who this time hands over the directing chores to BJ McDonnell, the camera operator on the previous films, and clearly filmmaker who knows his way around the swamp and the gore. Opening in the US on June 21, it may well all be pretty standard horror fare, but it slickly made and there is no denying there is a market – both at genre festivals and on home entertainment – for this sort of gore-heavy film.

While the police reluctantly head into the swamp to recover a series of corpses, the police chief’s journalist ex-wife (Caroline Williams) is keen to talk about Kane to the imprisoned Marybeth. Apparently she has done some research with a voodoo priestess (very handy) and it turns out (even more handily for the filmmakers) that Crowley is actually a ‘repeater’, cursed to be reborn night after night in the same hulking and murderous form.

Which is bad news of the heavily armed police squad ambling around the misty and murky swamp. The film essentially follows the various bloody and gory killings of the trigger-happy cops, while the two women try and unearth a clue to what cursed Crowley in the first place in the hope they can find a way to finally kill him.

As might be expected the killings come thick fast – cue dismemberings and shootings aplenty – and while it is all rather familiar, it is at least smartly paced, with the swampy gloom helping to mask the sometimes less than convincing special effects.

Kane Hodder supplies to hulking malevolence to good effect, while the casting of Zach Galligan (from Gremlins) as the police chief, Caroline Williams (from Texas Chainsaw Massacre 2) and Derek Mears (who, like Hodder, has played the masked killer Jason at one point in the Friday The 13th series) help give the film a nice in-crowd genre edge.