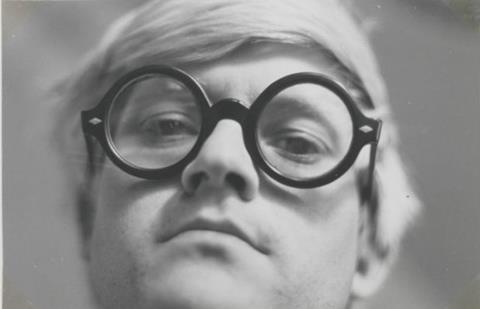 A life, work and spirited personality of acclaimed British artist David Hockney is wonderfully illustrated in Randall Wright’s absorbing documentary Hockney, which offers up an intimate and insightful delve into the life of a charismatic man whose passion for art is still intense and whose wry sense of humour still shines through. The film had its premiere at the London Film Festival.

Smartly weaving archive photographs and home movie footage made by Hockney and his friends with found footage material from the period and then laced together with contemporary interviews with Hockney and various friends.

While a famously private man, the 77 year-old Hockney is on sparkling form for his interviews here, and while they form a modest part of the film his sheer charm, zest for art and engagingly withering sense of humour shines though. Yes his life and work has been covered in documentaries before – most recently with John Rodgers; 2013 film Make Your Own Damn Art! – this new film pulls all of the strands together and offers a fascinating portrait of a remarkable talent. In fact, director Randall Wright himself made a film on Hockney in 2004, titled David Hockney: Secret Knowledge, and clearly that prior relationship helped in the process of making this new film.

The fact that The Smithsonian Channel is involved in the funding structure points to the project featuring at galleries and dedicated arts programming channels, but given the appetite for film work on art and artists out there it could easily fare well in terms of more formal distribution, especially when linked to his work at galleries and arts-linked venues.

Smartly weaving archive photographs and home movie footage made by Hockney and his friends with found footage material from the period and then laced together with contemporary interviews with Hockney and various friends, the film charts his life story in fairly familiar chronological fashion and also allows for wonderful stories to be told and early art work and influences to be noted. The fact that some are interviewed – such as Wayne Sleep, George Lawson and Celia Birtwell – in the very spaces where Hockney painted them adds much the sense of tone and atmosphere.

Though rather languidly paced, the film never outstays its welcome, and while appropriately there is extra attention to certain inspirations – such as swimming pools and water and his famous painting A Bigger Splash – and motifs it is the interview with him towards the end of the film that is most satisfying as he looks back, makes a few jokes and also looks to the future. A delightful tracking shot through his Los Angeles’ home’s garden is a delightfully vivid and warm way to close such an astute and insightful documentary.