Hop leaps to the top of the UK box office 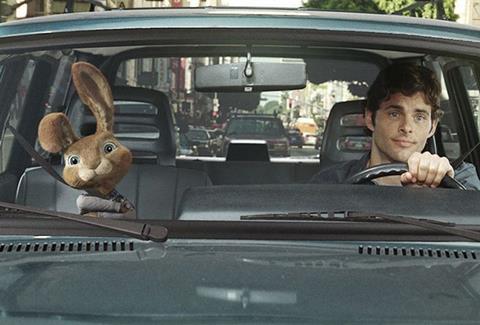 Optimum’s strong start to the year continued as Source Code delivered a week-high screen average of $5,195 (£3,218) after debuting second with $2.1m (£1.3m). Duncan Jones’ sci-fi helped the distributor clock up its best ever box office weekend. Its $3.4m (£2.1m) haul resulted in a market-high 25.88% share of the UK box office this weekend.

The result follows Optimum’s biggest-ever box office year to date in 2010 and with the likes of Attack The Block (May 13), Larry Crowne (July 1) and Tinker Tailor Soldier Spy (Sept 16) to come, 2011 is shaping up to be even better.

Last week’s champion Limitless dropped to third and now stands at a healthy $7.0m (£4.3m) after a further $1.9m (£1.2m) was amassed. Its 42% week-on-week drop was the joint strongest holdover performance (along with Optimum’s Unknown) of the top 20.

Hop faces stiff competition to retain top spot next week as Fox’s Rio flies onto our screens, along with Walt Disney’s Mars Needs Moms which will be looking to improve on its damp American debut. Sony’s The Roommate and Paramount’s Tomorrow, When The War Began (the biggest local film in Australia last year) also receive saturation releases.