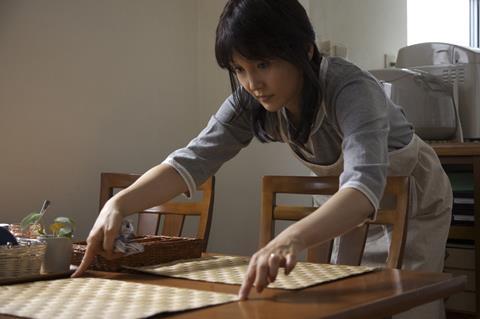 Yoshida Koki shines a limpid light on salary-family alienation in the Tokyo suburbs in Household X (Kazoku X), a return to the big screen after 2007’s Symptom X. His protagonists - bulemic mother Michiko (Kaho), distracted dad Kenichi (Tomorowo) and sullen teen Hiroaki (Tomohiro) - fail to connect with each other in their little pocket of Japanese suburbia, but they don’t make much of a cinematic dent either, treading familiar ground with little new to say.

Koki’s artistic take is livelier than the events onscreen.

Wandering silently around the streets of suburbia, their house, and workplace like a trio of zombies, the Hashimoto family could have some limited appeal for festival programmers, although the story feels like entering a time warp in which “society” is the villain and the film-maker has no response.

Opening with a shot of a picture frame showing the family in happier times (a later sequence will suggest that it was taken as they first moved to suburbia), Household X  is constructed as a vacuum of a film into which Koki allows no context.

We never know how the Hashimoto has family moved to a point of such deep unhappiness, but we’re certainly made aware that they’re here to stay. Early subtleties, with Koki depicting each passing the other silently in the house, are repeated to the point where the viewer begins to feel the same depressed alienation as the characters onscreen. And on we all lurch, until Koki draws a somewhat arbitrary line under the whole affair.

As depressed bulemic housewife Michiko, the home-maker who Koki depicts as society’s true victim, actress Minami Kaho bears the weight of the film well, but it is a heavy burden. She is the non-expressive Asian counterpart to the kitchen sink wives of the ’50s in this silent and humourless affair.

Spending much of her screen time chopping vegetables or straightening kitchen mats, the ignored Michiko stands helplessly by as the food in her freezer rots and the water in her new cooler turns luridly mouldy. Worried about his future, silent dad Kenichi fails to even notice people speaking to him in the office, while son Hiroaki looks for full-time work and remains a cipher. Dialogue is minimal, to the point of extinction.

Koki’s artistic take is livelier than the events onscreen, although occasional hovering handheld shots down the backs of the protagonists do more to jar than enhance the claustrophobia. A long tracking sequence down a suburban street is a standout. Ultimately, though, Household X is a peculiar millieu for a young film-maker to explore, and Yoshida Koki never makes a compelling case onscreen as to why he has chosen it.