How can blockchain benefit producers and distributors?

At the ‘How blockchain can work for your film’ session co-hosted by Screen International and SingularDTV in Toronto, executives discussed the tech’s potential for revolutionising the industry. 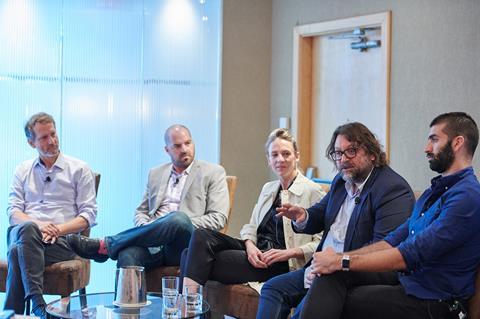 Executives at the blockchain entertainment company SingularDTV addressed how the technology can benefit producers and distributors at a panel in Toronto in partnership with Screen International.

Daniel Hyman, SingularDTV’s vice-president of entertainment, finance and development, outlined the essence of blockchain, explaining it as simply another way of distributing information from point A to point B, within a transparent and accountable framework. “It is verifiable record keeping,” Hyman said at the ‘How blockchain can work for your film’ session at the Soho Metropolitan on September 8. “And it works for all different kinds of businesses and films.”

SingularDTV produces, acquires and distributes film and music, and launches its first original film, Alex Winter’s documentary Trust Machine: The Story Of Blockchain, in New York on October 26 and Los Angeles on November 16. It has also wrapped principal photography on narrative feature The Happy Worker, which includes David Lynch among the executive producers.

On the technology side, the company is planning the launch of a VoD service in 2019, and recently created Rentalist, which offers production crew, equipment and location rentals on an Airbnb-type platform. It also launched rights management portal Tokeit, described by Hyman as “a Kickstarter on blockchain steroids” where anybody can create a token, embed an IP on it, and use it for rights, royalties, project funding, management and audience engagement.

“We want to offer a range of business models and an alternative to the traditional entertainment industry, whereby we remove the intermediary and create a pathway for producers and creatives, as well as distributors, managers and agents, to communicate more directly to audiences so they have a clear pathway to data, record-keeping and accounting,” explained Jason Tyrrell, SingularDTV’s vice-president of content.

Hyman, who was previously a sales agent at Preferred Content, noted the challenges agents and producers face today, citing the example of antiquated handwritten contracts and cheques for incremental amounts that still arrive from theatres. That struck a chord with fellow panellist, Oscar-nominated producer Steven Markovitz of Cape Town-based Big World Cinema, who has Rafiki and aKasha in TIFF’s Discovery section.

“We are in a bit of a crisis right now,” said Markovitz. “There is a lack of transparency. Recently, I had to take a trip to try and get money directly from a client. When I did get paid, the total was incorrect. It took nearly two years to get that money. There is a lot of ripping off.”

He added that while blockchain is in its infancy, he hoped it will make the industry more transparent, from rights management to selling cinema tickets. “Every festival, I hear of companies launching blockchain,” Markovitz said. “We have to try this out and start getting partners on board. If we don’t, it’s a missed opportunity. We have to start engaging.” He estimated that by next autumn he would start using blockchain for rights management.

Janet Brown, executive vice-president of distribution at production and distribution outfit Gunpowder & Sky, said she was excited about the opportunity to use blockchain on her upcoming projects, including SXSW premiere Prospect. The sci-fi feature will be released theatrically in November and Gunpowder & Sky has partnered with SingularDTV on the film’s upcoming digital launch through a 30-day exclusive TVoD window on SingularDTV’s blockchain-enabled VoD platform.

“We are thrilled to work in a more alternative space for this film,” said Brown. “We think this structure will speak more specifically to sci-fi and crypto-currency audiences, that we hope overlap. It’s like a micro-windowing strategy where we are talking directly around this community. We need all that we can to help small films like this with different distribution models.”

She added that blockchain was also a way to engage with audiences throughout the production process, from pre-production to post. “You can build an audience and raise money, and collect all the way through the lifecycle. It’s not like you’re having multiple conversations. You’re going back to the same well,” she explained, adding that fans can get more involved in the overall process of the film.

When asked about the how-to of blockchain, including basic start-up and audience engagement, Hyman said it is a simple process of working with a blockchain-specific development team, and reaching out to audiences via typical social-media channels such as Facebook and Twitter to promote content to audiences. “Audiences will look at this content [like they would view content on any other platform],” said Hyman. “And you will still have to hustle to get people to see your project. The idea is this is a one-stop shop, and audiences’ last point of sign-in. Data and ownership are put back into the viewers’ hands. With this, there is no platform asking you to pay, or cancel you out. You, as a rights-holder, have the control over the millions of people you have been speaking to. You have data and identity of ownership.”

Brown added: “It’s like sophisticated collection account management. You won’t all of a sudden have Netflix reporting their views and licence fees — that problem is not solved — but whatever deals you’ve done, you pay that into blockchain. Someone else doesn’t have to control it. It’s like paying into a pot and that pot pays everyone. We get a payment from Netflix or any other data coming in, we then show that on the blockchain, and we can hold the distributor or whoever it is accountable because they can actually see the debits and credits, like transparent account management.”

Brown also gave the example of shareable transaction reports. “I receive daily reports from iTunes such as how many transactions we receive on EST and VoD,” she said. “I’m using that information right now for a movie I’m releasing. I’m checking how the marketing is turning into pre-orders. This information is not often shared to distributors. On the blockchain, everyone can see this data.”

“Traditional marketing spend is a fixed amount,” said Hyman. “And there is a lag on the effect of your spend, until you receive the box-office reports. If you can create a new transparent system, you can actually know whether people are showing up for your theatrical exhibitions the next day or the day of. That way you can tailor your marketing spend, you can cut one market and re-invest in another.

“That is future state, to be able to bring theatrical transactions on to the chain so that a producer/creator can log in and see how a particular theatre is doing with sales, and whether that correlation with marketing spend exists. That is where we hope to be going.”

“No-one knows where all this is going, but we have to try to invest in it,” insisted Markovitz. “From the beginning of a project, I want to use blockchain. It’s difficult, there will be myriad contracts you have to change. But that’s how we will get it started.