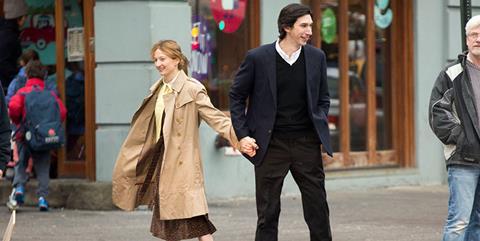 Moving from one obsession to the next - numerology in The Solitude Of Prime Numbers (2010) to post-natal mental disturbance in this one - Saverio Costanzo’s new film will most probably be tagged as an attempt to trespass on Polanski territory, even though there are no allusions here of the devil or his cohorts, as there were in Rosemary’s Baby.

From the light-hearted humour of the early scenes, the plot shifts gears into a grim dysfunctional family drama, ending in an arbitrary shock that suggests the script had worked itself into the kind of knot that it is no longer capable to untie.

Dealing with a delusional mother who believes she knows what’s best for her baby, even if it kills him, Saverio’s film doesn’t have anything diabolical about it. It starts as a quirky love affair launched in the restroom of a New York Chinese restaurant, it ends as a tragic pathological case and its fate will very much depend on audience response to the performance of the lead star, Alba Rohrwacher, who starred in Saverio’s previous film as well and is supposed to carry Hungry Hearts on her frail shoulders.

Rohrwacher, an actress who seems to fight her private demons in most of the parts she plays and appears to be always at odds and misunderstood by the entire world, has been practically typecast here as a young woman obsessed with purity, who will not let either air or food contaminate her little baby, going far enough to actually endanger its life by systematically starving him. Not a simple role to tackle, and Rohrwacher’s choice to play it as if she is in a trance for practically the entire length of the film is not the easiest one to swallow.

Costanzo’s script, based on a novel entitled Il Bambino Indigo (The Indigo Child) by Marco Franzoso, follows Mina (Rohrwacher), a young Italian woman living in New York, who believes she is pregnant with “an indigo child” (a medieval concept brought back to fashion in recent years, children possessing special or even supernatural traits), and refuses to allow anyone, including her husband, to tamper with her baby.

Though to begin with she appears to be a normal, average woman and her affair with a American engineer Jude (a youthful, innocent looking Adam Driver) is no doubt the liveliest part of the film, her emotional instability is soon unveiled, first when she finds out she is pregnant and then when she refuses to go through medical check-ups or to listen to any advice from the medical profession.

Once she gives birth, she puts her baby on a strict vegetarian diet, deprives him of essential nutrition which she considers harmful, will not expose him to the polluted city air, or allow anyone carrying street germs to touch him before washing up. Her husband, Jude, worried when he notices the baby is not growing, asks for the opinion of a pediatrician, only to be told that the child is undernourished, badly under-developed and needs an urgent change of diet to retrieve the lost time.

Mina, now apparently living in a world of her own but still demanding to be trusted because she is the baby’s mother, refuses to listen to anyone, and Jude, though still in love with her, realizes she has lost her grip on reality and has no choice but to take matters into his own hands. This leads the couple to a succession of mutual attempts to deceive and undermine each other, while the affection that kept them together as a family (the only one Mina claims to have ever had) dwindles away in one stressful confrontation after the other.

From the light-hearted humour of the early scenes, the plot shifts gears into a grim dysfunctional family drama, ending in an arbitrary shock that suggests the script had worked itself into the kind of knot that it is no longer capable to untie. Costanzo’s insistent use of close-ups and nervous camera movements introduces a disquieting atmosphere long before it is needed, putting the audience on edge long before it needs to.