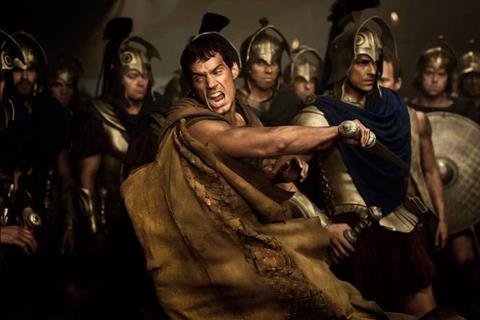 The blood flows, the decapitated heads roll and the muscles glisten in Immortals, a very serious gods-and-gladiators epic that would be a lot more fun if anybody in the film was having any fun at all. Directed by Tarsem Singh Dhandwar with his usual spectacle-heavy visual style, this Relativity release only occasionally offers up the rousing delights that the genre usually provides, instead opting for a grim, violent milieu that at least suggests that budding star Henry Cavill (soon to be Superman in the Man Of Steel reboot) possesses the goods to be a commanding screen presence.

The impressive 3D conversion proves extremely valuable to Immortals’ overall visual strategy, which is to immerse the viewer in a vivid, imaginary world of gorgeous sunsets and deep skin tones.

Opening November 11, Immortals will benefit from being the principal action movie in the marketplace, although probably its greatest hook is its resemblance to the hyper-stylised aesthetic of 300. But that resemblance could also end up working against Immortals if audiences decide they’d rather just wait for a 300 or Clash Of The Titans sequel. With the film’s biggest marquee names being Mickey Rourke and Freida Pinto, the film looks likely to be a slight underperformer theatrically, but it could prove robust in ancillaries.

Immortals takes place in 13th century B.C. as a fatherless peasant named Theseus (Cavill) vows revenge on murderous King Hyperion (Rourke) for killing his mother. Teaming up with a beautiful virgin oracle (Pinto), Theseus discovers that he’s been selected by the gods for great things and goes on a quest to recover a mighty bow that could help defeat Hyperion’s formidable army.

Tarsem Singh Dhandwar, more commonly known as simply Tarsem, previously made The Cell and The Fall, movies in which bold visual set pieces reigned supreme over tight narratives or compelling characters. Immortals does have a conventional plot involving an underdog going on his hero’s journey, but once again the storyline seems like little more than an excuse to put together a series of striking, dreamlike settings, whether in ancient Greece or in the heavens above where the gods look down on the mortals.

Tarsem’s tableau-like style makes for sumptuous eye-candy throughout, especially when he puts together his ultra-bloody action sequences, but it becomes nearly impossible to care about much of the drama when the screenplay (credited to Charles Parlapanides and Vlas Parlapanides) paints the characters as dully good or evil without much charm or fire to them. As a rule of thumb, Immortals is far more resonant when the swords are flying around than when anyone is speaking in predictably solemn tones.

Still, Cavill demonstrates rugged sex appeal and leading-man charisma as the film’s square-jawed hero. It’s a bland role that requires an actor to fill it with his essence, and Cavill more than convinces. Conversely, the cruel Hyperion is a sadistic, whispering menace, which simply requires Rourke to glower with appropriate verve, which he does nicely – although he does chew the scenery a bit much.

The impressive 3D conversion proves extremely valuable to Immortals’ overall visual strategy, which is to immerse the viewer in a vivid, imaginary world of gorgeous sunsets and deep skin tones. Between the rippling, half-naked bodies and the orgiastic fight scenes, there’s an undeniable fetishising of the human form that gives Immortals a kinky appeal. Unfortunately, Tarsem doesn’t seem as interested in the souls within those bodies, which proves to be a mortal blow to his film.