In The Land Of Blood And Honey 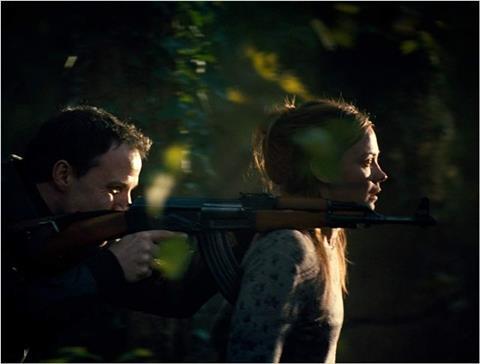 Funneling not only her enormous celebrity clout but also her impressive resume as an actor in a constructive direction, Jolie, still evolving in her commitment to foreign affairs and social injustice, courageously takes on for her directorial and screenwriting debut the subject of the Bosnian war (1992-95). Her focus is principally on its impact on Muslim women who suffered unspeakable horrors in the Bosnian Serb rape camps.

Jolie is correct when she expresses disbelief that most of the world stayed out of the conflict.

Commercial appeal is limited, perhaps appealing chiefly to progressives, aficionados of the war, and political junkies. Not only did the armed conflict end 16 years ago, but the topic has proven in the past difficult to finance, as well as to lure audiences. As one might expect given Jolie’s remarkable credentials, the greatest strengths of the film are in the performances she elicits.

But her stretch is bigger than her grasp. Unfortunately, the improbabilities of a script that often misses the boat, overly tasteful direction for a movie that ventures into such horrific terrain, and the creation of over- and under-drawn characters chip away at the good intentions and the skills of much of the cast.

She goes beyond acceptable dramatic license. Except for a fascinatingly complicated male protagonist, the Serbs are caricatures, gleeful when sniping at the elderly and the young and throwing babies off balconies, whereas the Muslims are at least more differentiated, both positively and negatively, brave fighters and traitors amongst them.

That Jolie chose to remain behind the camera—she opted for an authenticity that included working with actors only from some of the republics of ex-Yugoslavia, especially Bosnia and Serbia—will not help sell tickets. Neither, and this is to her (and GK Films’s) credit, will opening it in the US and some other European territories with the Bosnian/Serbian/Croatian soundtrack rather than in the alternate English one shot simultaneously. Film District releases the film in the US. December 23; no date has yet been announced for UK distribution.

One selling point could be the foregrounding of an outstanding portrayal of a Bosnian Serb camp commander and civilian cop, Danijel, by the Bosnian Serb actor Goran Kostic, despite the sometimes ludicrous plot situations into which he is thrust. His physical agility, soft but masculine face, piercing blue eyes, and remarkable capacity to shift moods in a split second recall a younger Ralph Fiennes.

Many will find it odd that the head of a rape camp, who has a strong rapport with his men, is the sympathetic tragic hero of the tale. He is unable to reconcile an oedipal chasm between himself and his inflexibly nationalist general of a father, Nebojsa (veteran Croatian Serb actor Serbedzija, fine in a two-dimensional part modeled on
Bosnian Serb military commander Radko Mladic, architect of the Srebenica massacre of 8,000 men), with a wildly improbably love affair inside the camp and later on, in his bedroom in the Serbs’s Sarajevo headquarters, with a beautiful young Muslim woman, the nearly inert Ajla (Marjanovic), whom he had met one evening in a bar just before an explosion nearly killed them both and was one of the first signs of war.

The relationship never had a chance to develop - they next see each other four months later, after she has been rounded up and sent to the camp - and the likelihood that a respected Bosnian Serb captain from a distinguished military family would keep fairly openly a mostly willing Muslim lover in his quarters is too preposterous to contemplate. Danijel’s transformation from nearly unwilling gunner to bestial killer is deeply connected to the state of his romance.

Jolie opts for graceful pans and tilts and an overly signaled, soft piano and string score that intervene with the more visceral response that should emanate from the action. She selects art over grit. It can border on being precious.

In fact, Ajla is an aspiring portrait painter, and the film begins and ends with close-ups of eyes on canvases, and even her one confrontation with Danijel’s bigoted father becomes a sketch session. To be fair, her gift does serve narrative functions as well—it allows her to become less of a victim (Danijel protects her from rape) than a cog in the story, and provides a key plot point involving a painting of her beloved sister, Lejla (Glodjo).

When the lovers sneak off into the night to Sarajevo’s municipal art museum and she begins explaining art to the clueless man as the examination of “empty space”—during a war of ethnic cleansing, in which the two are as much enemies as enamorados. More than 100,000 people died, 2,000,000 were displaced, and up to 50,000 women were violated during the conflict.

The rapes marked the first time that sexual violence was recognised as a war crime many of those responsible indicted. Jolie is correct when she expresses disbelief that most of the world stayed out of the conflict. As an American secretary of state says on an English-language radio broadcast, “We don’t have a dog in that fight.”

At least someone of Jolie’s global stature is attempting, even at this late stage, to rectify the gross injustices perpetrated against the Muslims that were tolerated in the name of a mythological Greater Serbia, masterminded by Slobodan Milosevic. Noting in post-credit text that the animosity still remains high, Jolie makes a case for addressing these issues years after the Dayton Accords ended combat.