Gould sat down to discuss her new documentary ahead of the world premiere at the Tribeca Film Festival on April 17. 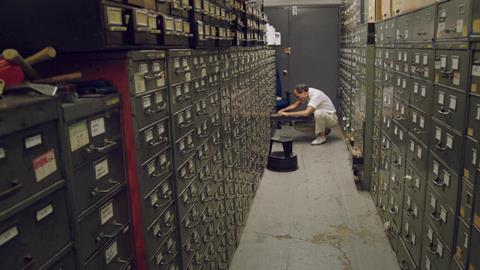 Obit explores the world of obituary writers, their craft, and their history, and reveals that depsite the association with death, their business is a celebration of life.

Gould tells Jeremy Berkowitz about some of her favourite pieces, bringing laughter from darkness, and the future of the craft. Cinetic Media handles world sales.

I was kind of surprised by how funny all of the obituary writers were. I was wondering if this was something you knew about going in or you found out in the filming?
I figured it out in the filming. I didn’t really have any expectations of what they were going to be like before I started filming, but as one would naturally imagine, when I started tackling the idea I definitely wanted to make sure that it wasn’t a real sad movie, or melancholy, or forcing people to sit with sad ideas. And so as I was formulating the interview questions I was always sort of reaching for humour.

The first obituary you went over was about the man who rowed across the sea. Was this something you knew about before or you learn about most of theses stories from the writers?
A little bit of a mix. I had already been on the Obit’s desk when the Fairfax obit was written, so I was watching that and I remember being pretty amazed by the public reaction. But in all honesty I was interested in the obituaries that the writers remembered. I did a lot of writing and research beforehand, but those were just my preferences and that was pretty irrelevant. So, I was pretty interested because the writers write so many obits. It’s like you said about the movie: I wanted to know which ones actually stuck with them. And those are the ones that mostly made it into the film.

Were there any notable stories that didn’t make it in the film that you still love and can share?
Oh yeah. There were a lot. Bobby Fischer was one that I really wanted to include. This great, great cyclist, Jure Robič. He was a Slovenian cyclist and did these races where he would bike across the country non-stop; so you’d bike for 72 hours with these teams. I can’t imagine a greater physical endeavour. It’s called Race Against America. And this guy survived like ten of these, and then he got hit by a car and died. So, there’s all these crazy stories [about people] who seemed immortal and then them dying. People that I loved personally that didn’t make it. It’s too much to go into. There’s so many stories that wouldn’t fit in.

Before you made the documentary was there any obituary you remembering reading and thinking you have to make this film.
On The New York Times website they often put blasts from the pasts from people like Isaac Asimov or Eleanor Roosevelt and these people who died a long time ago. And I was so fascinated by the language that was used and the way their deaths were described in oddly specific ways of how they expired and who was by their bed and I started noticing the difference between then and now. And that peaked my curiosity about what has changed culturally that has shifted; how obituaries are written. I would say that by reading a lot of really old obituaries from the last 1800s and the early 1900s that really cemented my interested in what obituaries are and how they change over time.

It seems like because of Facebook and the internet everyone is writing their own obituaries for people they knew. Do you think this will eventually take away from places like The New York Times doing it?
I think there’s room for both. I think it’s a beautiful thing that people do the things that they do, and whatever impulses they have, whether it’s admiration or whatever. People use social media to share the news and share their thoughts and memories. But I also think there’s completely a need for editorial obituaries that have access to more information and greater research and access to the families in a way the average Joe doesn’t. I think they’re both important.

Did the cameras ever distract the writers from getting their work done?
Being in the newsroom was one of the biggest anxieties for me in this whole process. We were insanely efficient. I think we were only there for three or four days total. We did a tonne of planning. It was a meticulous effort to stay out of their way. We used the smallest crew possible, but at the end of the day with our abundant planning and the pressure, the writers were able to do what they did.