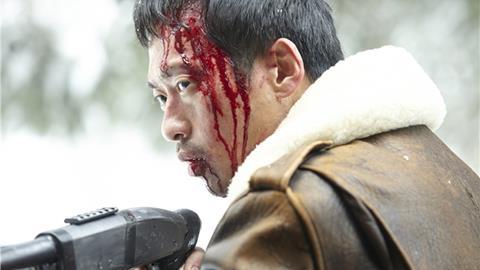 An impressively quirky snow-bound home invasion comic thriller, writer/director Noh Young-seok’s rather droll film may well take its cues from many a mainstream Hollywood chiller, but he manages keep Intruders very much in the slow-burn and disarming camp rather then ever resorting to by-the-numbers horror thrills.

Once it is appreciated that Intruders is no traditional home invasion film and that it is based on dry humour rather than bloody chills then there is a goodly amount to enjoy here.

This may be very much his style – his 2008 film Daytime Drinking, was also an engagingly left-field effort – and Intruders does deliver some smart humour and a striking sense of the absurd, but it may also disappoint audiences who look to the clichéd title and are hoping for some no-holds-barred bloodthirsty thrills.

The format and concept may all sound depressingly familiar – a young writer heads to a remote cabin in the snowy woods to finish his latest screenplay (and yes, Misery gets an early name check) only to feel menaced by oddball and rather threatening locals – but the tone is more subtle dark humour than chills. The film, which premiered at Toronto, also screened at the 2014 Rotterdam Film Festival.

Sang-Jin (Jun Suk-ho) arrives at a remote B&B owned by his producer’s parents determined to lose weight (he is on a boiled egg diet) and finish his screenplay, but his plans for solitude are hampered by some odd locals (one of whom, a talkative man fresh out of jail, tries to befriend him on the trip there) and a carload of skiers (including a beautiful but staggeringly grumpy young woman), unaware of the building’s off-season closure and determined to take advantage of his good-natured though reluctant hospitality.

Before long Sang-Jin spots a dead body on his porch and things get rather complex. Crashing into one of the rooms to try and call police, he accidentally bumps into the woman coming out of the shower, gets accused of voyeurism attempted rape, and finds himself tied up while the killer walks free.

The arrival of a police officer barely helps matters – he turns out to be the brother of the local who tried to befriend Sang-Jin…the very person he thinks is the killer – and things get really strange after much running around in the woods; the discovery of more bodies, and the final revelation of who the actual killer is. To say more would spoil the story – but needless to say it is a revelation that is ripped from the Korean headlines.

Once it is appreciated that Intruders is no traditional home invasion film and that it is based on dry humour rather than bloody chills then there is a goodly amount to enjoy here, and while its low key thrills-and-spills may disappoint horror-thriller fans it is a modestly inventive film that succeeds in its playful deconstruction of the genre.