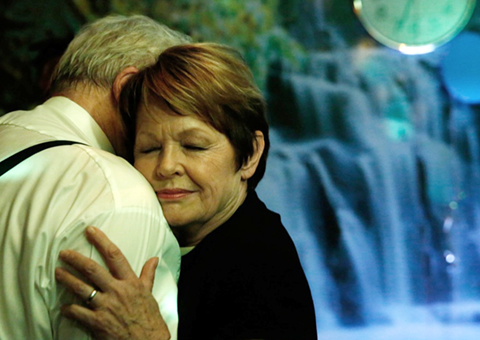 Key House Mirror (Nøgel hus spejl), set in a Danish nursing home, delivers another masterclass from veteran actress Ghita Norby, even as it confronts us with the harsh reality of her old age.  It’s a push-pull experience; she dominates the screen and is compelling, yet the situation she and Michael Noer make so believable is anything but.

Noer’s initially fresh, ultimately over-burdened, drama is set a Danish nursing home, where Lily (Norby) devotedly cares for her stroke-ridden husband. She is given an unexpected second chance at love when a dapper new neighbour moves in across the hall.  It’s yet another dominating performance from Norby in the role of an ailing matriarch, following swiftly on from Bille August’s Silent Heart in which her character grappled with assisted suicide.

Key House Mirror, which premiered at the Goteborg Film Festival, is no more cheerful, despite its light and confident start. Lily’s harried daughter (Pallesen) resists any change, but Lily grasps desperately at the chance of a new life while her husband slips silently away.  Noer’s abrupt introduction of a second arc involving Lily’s mental deterioration proves a heavy load, however, and too brisk a shift in tone for what started out as a more delicate piece.

Key House Mirror marks a change of direction from talented Danish director Michael Noer, whose previous films R and Northwest dealt with prison and gang culture. The story was inspired by his own experience, and has an entirely truthful ring. A striking note is the affluence of the nursing home and the comfort of Lily’s situation; she lives in a homely apartment with a team of sympathetic medical staff on 24-hour call – many viewers outside Denmark will not recognise this as a likely prospect for their own old age.

The prospect of love and sex at Lily’s stage of life, and the ripples it causes in her family, is consistently intriguing and well-dramatised. Noer is well-assisted by Magnus Nordenhof Jonck’s fluid, confident camera-work, and Rie Lykke’s striking production design. Lily’s descent into mental illness and dementia– the title of Key House Mirror refers to a memory test – is also visually striking as the camera begins to wheel and Lily’s comfortable surroundings start to resemble a prison.  That the two sections don’t quite fully gel together doesn’t detract from the integrity of the whole piece.

Swedish veteran Sven Wollter provides Norby with a sparkling foil in the role of the dapper “pilot”, a man who has never found love and now sees it fading away.