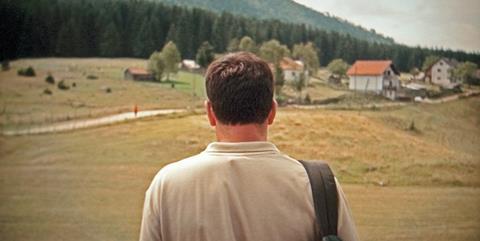 Defying most conventions of place, time, and character in cinema, Drljaca creates in this unusual, clearly inexpensive film about memory and trauma associated with war a slow, deliberate, and most incredibly, quiet work. Unveiled at the recent Toronto International Film Festival in the Discovery section, it is one of the most effective films to explore the nightmarish conflict between Bosniaks and Serbs in the early 1990s.

Drljaca maintains the placid atmosphere until the final scene, which will be embraced by some and resoundingly despised by others.

Oddly enough, this is the first full-length work by the Sarajevo-to-Toronto transplant. Few of the maniacal, violent films or the aestheticised mood pieces about the subject that have emerged in the past 15 years come close to treating the topic in such an original manner, one that effectively broaches both sociological and psychological perspectives.

Drljaca is far from rule-bound. He frequently follows his two principal characters with in reverse tracking shots that foreground neither facial nor other recognisable features. He surveys the verdant countryside and an unusually silent Sarajevo itself with languorous pans, building a near-perfect sound design from calming, ambient noises not unlike the euphonious music of wind slinking through a shell or a tunnel. Most daring of all, he develops characters who stray from distinctiveness and are at times inseparable.

Two types of spectre hover over Krivina: the traumatic recall of a seemingly irresolvable conflict, and more literal ghosts, victims of a disaster involving a bus packed with young female basketball players. Rescue attempts are the only instances of cooperation between the antagonistic forces of Bosnia and Republika Srpska. (The Serbo-Croatian title translates loosely as a metaphorical “bend in the road.”)

Miro (Slavkovic) is a Bosniak approaching middle age, who, like many of his generation, immigrates to a safer, more economically solid country (Canada). He has suffered emotional damage. Perhaps as a palliative, he goes on the trail of his best friend from before the conflict, the Serb Drago (Geljo), an amoral war profiteer and accused war criminal who most assume has just disappeared. Only after a few encounters between the old buddies do we realise that another spectre is at play here: imaginary players. It is not unlike listening to cell-phone conversations on the street. After a while, you realise no one else is there.

Drljaca masterfully integrates this fantastic storyline with scenes of natural beauty, which would normally be as far as you can get from the havoc and devastation wreaked by ethnophobia and unhealthy nationalism. Once again, the filmmaker goes against the grain, pinching us with a tale located in a twilight zone between brutal reality and the supernatural. He toys with accepted notions of time, relaying the story outside of chronological or any rational order, rewarding spectators with satisfying slight shocks when we unravel a surreal plot point.

Drljaca maintains the placid atmosphere until the final scene, which will be embraced by some and resoundingly despised by others. In a flash the loud music of a heavy-metal band from 1983 takes over as if to drown out, almost nullify, everything that has preceded it. His mise-en-scene, even the placement of simple objects like glass bottles, is obsessive, self-conscious to the extreme, so one must assume this is a carefully thought-out switching of gears, maybe with meaning, maybe just for an artful, or anti-artful, sense of disruption. One thing all will agree upon, however, is that this filmmaker has talent to spare and will make superb films as soon as he has a decent budget to work with.